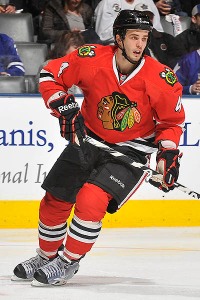 With NHL draft now behind us, we can really start to speculate as to what types of moves the Blackhawks will be making this summer. Whether they make trades, sign free agents, or do both (most likely), one thing is for sure. The Hawks will begin next season with some new names on their roster.

About a month or so ago, there were rumors going around that the Hawks would be looking to trade away Dave Bolland and Niklas Hjalmarsson. The reasoning for these proposed moves was that the Blackhawks felt Kruger could take Bolland’s spot as a shut-down center, and trading away both of those salaries would free up a lot of cap space to sign top free agents. As of right now, I am not hearing any rumors involving a Dave Bolland trade. Whether or not it stays that way, only time will tell. As for the possibility of Niklas Hjalmarsson departing via a trade, that remains very true.

Just about everywhere I have looked regarding a trade involving Hjalmarsson has indicated that the Blackhawks are aggressively looking to trade him for most likely a center who can win face-offs. As we all know, the Blackhawks were not very good at winning their draws last year, with the exception of Jonathan Toews. One rumor I saw stated that the Hawks were talking with the Ottawa Senators about a trade that would send Hjalmarsson to Ottawa in exchange for Zack Smith. Smith is a 24 year old center who has won over 50% of his face-offs throughout his career. This trade makes sense for both teams in that Ottawa needs a defensive-defenseman like Hjalmarsson, and the Hawks need a center who can consistently win face-offs. I heard about this trade about a week or so ago, but I have not heard anything more about it. The only thing that do know for sure is that Hjalmarsson is very much so still on the trade block.

After the Hawks resigned Johnny Oduya for $3.5 million, it sure looked like they wouldn’t be in on trying to sign Ryan Suter this summer. However, that was before all of the Niklas Hjalmarsson rumors began to appear. If the Hawks do end up trading Hjalmarsson before July 1 (the day free agency opens), they will for sure be in on the “Suter Sweepstakes.” If they do not trade him before July 1, then don’t expect them to trade him at all. The only reason they would trade “Hammer” would be to free up a roster spot and cap space for Ryan Suter. Otherwise, it would make no sense to trade away their best shot-blocker. If the Blackhawks do find the right deal that would send Hjalmarsson elsewhere to allow themselves to bid on Suter, I would be all for it. Ryan Suter is exactly what the Blackhawks need. He is a superior defensive-defenseman, as well as a superior offensive-defenseman. It’s no secret that the Hawks want a lot more production out of their powerplay next season, and Ryan Suter would greatly help in that area. But again, unless Hjalmarsson gets traded between now and Sunday, don’t expect him to get traded at all, or for the Hawks to go after Suter.

As for Patrick Kane…..I don’t think he’ll be traded. The only elite winger that is being shopped by their current team is Rick Nash of the Columbus Blue Jackets. While I do see some upsides to trading Kane for Nash, I don’t think it will happen. The biggest reason is the fact that the Blue Jackets’ asking price for Nash seems to be too high for just about every team in the NHL. They want more than just a Patrick Kane-type player in return, and that “more” is something that the Hawks and most other teams are unwilling to give up. So if you want my opinion, don’t read too much into those rumors.

Neither Zach Parise nor Roberto Luongo will be playing for the Hawks next year, so forget about that.

Other than that, I don’t have much else to say. The one guy that I really felt would fit the Hawks perfectly was Jarret Stoll. He is a center for the Kings who wins the majority of his draws and is not afraid to throw his body around, not to mention his offensive skills. He played a huge roll for the Kings these playoffs. He could have chosen to enter free agency this summer, but instead he re-signed with L.A. for less money than he could have gotten somewhere else.

Keep your eyes and ears open here in the next week. If they Hawks are going to do anything significant, it will happen between now and Sunday.