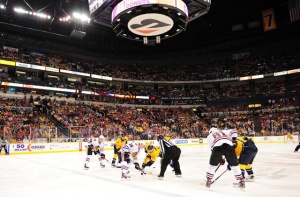 I believe there are a few ways of viewing this move by the Predators organization.

First, this will in fact most likely lessen the amount of Blackhawks fans that attend games in Nashville. Unless someone is truly a die-hard hockey fan, the only people buying tickets to an additional Predators home game will be actual Preds fans. I don’t think any Chicagoans want to be purchasing tickets to a Predators game that doesn’t involve the Blackhawks.

Second, if you’re a Blackhawks fan like me, you might feel a bit proud of this whole ordeal. The fact that Hawks fans have made an opposing NHL team adopt a plan like this is pretty impressive. We should be proud of ourselves for how well we represent the Blackhawks on the road.

Third, and from a casual fan’s perspective, this plan almost seems like it will hurt the city of Nashville when it’s all said and done. If you’re familiar with how many people from Chicago flock to Nashville when the Blackhawks or Bears are in town, then you have an idea as to how much additional revenue Chicago fans provide for the local hotels, restaurants, and bars. By trying to keep Blackhawks/Chicago fans out of Nashville, the Predators are in fact hurting the local economy. Obviously the economic affects of this plan over an an entire year won’t be much at all, but those affects will be noticed when the Hawks are in town and not as many of their fans are.

If you were planning on traveling to Nashville this season to see the Blackhawks take on the Predators, there are still ways of getting single-game tickets. Websites like StubHub, for example, will still be selling single-game tickets to these game. The only downside of using the secondary market to buy tickets is that they will probably be more expensive than their face value. Personally, 90% of the sports tickets I buy are from StubHub anyways, and I’m sure I’m not the only one like that.