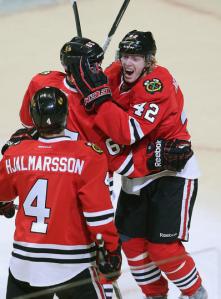 On Friday night, it was the Islanders who tried to take over the United Center. Their mission was unsuccessful as the Blackhawks won that game by a final score of 3-2. Then on Saturday in the second night of back-to-back games for the Hawks, the 0-4-1 Sabres looked to notch their first victory of the season in Chicago, but they came up short as well, losing 2-1. While the Blackhawks only won by one goal in both games, they really outplayed both New York and Buffalo for the majority of their respective games.

The Blackhawks outshot the Islanders 28-19 on Friday night, and really controlled the puck possession for most of the night. Some good goaltending by Kevin Poulin held the Hawks to just 3 goals on the night, but they generated a number of quality scoring chances.

Saturday night was some more of the same by the Blackhawks, as they only won by one goal, but dominated against the Sabres from start to finish. Ryan Miller was fantastic on the night, stopping 38 of the 40 shots that the Blackhawks put on net. At times in this game, the Blackhawks looked like they had one or two extra players on the ice. They had a number of dominating shifts in which the puck stayed in Buffalo’s end for a good 30-60 seconds at a time. Basically, the Hawks were skating circles around the Sabres pretty much the whole night.

Nikolai Khabibulin looked good in his first start of the season on Friday night. He stopped 17 of the 19 shots that the Islanders took, and came up with a few huge saves near the end of regulation to secure the Blackhawks’ victory. The only noticeable weak spot with Khabi was his puck-handling behind the net. He had one really bad turnover that nearly resulted in an Islanders goal. All in all though, he looked good.

What had been a major weakness through the first 3 games for the Blackhawks was the opposite in both games this weekend. The Blackhawks’ penalty was a perfect  5 for 5, and they looked pretty decent in killing off all 5 penalties. Still, their penalty kill is a work in progress, but it is definitely progressing.

Michal Handzus, who started as the number two center on Friday, saw his role rapidly decrease as that game moved on. By the end, he was on the fourth line and finished with a total of 9:17 of playing time. Saturday night he was a healthy scratch. This is something to keep an eye on moving forward. Handzus is old and not very skilled. He is not a typical number two center, which is what the Blackhawks have been asking him to be. Because of his lack of speed and skill, he has been dragging down the play of Sharp and Hossa at times on the second line, therefore resulting in his role reduction. If Handzus can’t figure things out, he could find himself with a permanent limited role on this team, similar to Jamal Mayers last season.

Jimmy Hayes was sent back to Rockford late Friday night, and Brandon Pirri was recalled to Chicago. Hayes, who looked great in training camp and the preseason, just didn’t look like the same guy once the regular season started. He has the skill, size, and ability to be a really good power forward in the NHL, but at times it seems as though he’s afraid to be aggressive. He doesn’t seem to use his size to his advantage nearly enough, and that has resulted in him being demoted back to the AHL. However, that’s not the only reason he was sent back down to Rockford.

With the decrease in Handzus’ role over the first four games, the Blackhawks found themselves in need of another center to replace ‘Zus. They therefore brought up Brandon

Pirri, who is much faster and much more skilled than Handzus. In order to make room for Pirri, the Hawks chose to send down Hayes. So while Hayes didn’t impress anyone in the two games that he played, he was also the victim of an unfortunate circumstance in which an open roster spot was needed on the Blackhawks to accommodate Pirri. Watch for Brandon Pirri to slowly work his way into the number two center position between Sharp and Hossa. This is what the Blackhawks ultimately want to have happen, but it is up to Pirri to play his way into that position.

One big positive to take away from the two games over the weekend, and really from all 5 games up to this point, is the Blackhawks’ powerplay. They notched another PP goal against the Sabres, and are now 5-20 on the season (25%). That’s good for 8th in the league. When you compare that to where their PP ended last season and in the playoffs, this is a nice improvement. They are doing a much better job at entering the offensive zone, and they are getting a lot more movement from everyone once they have themselves set up. Last year was a bunch of standing around waiting for the puck. So far this season, guys are a lot more active for the Hawks on the powerplay, and it is helping the results. Hopefully this continues and improves as we progress through the season.

Another positive that I saw from these last two games was the emergence of Joakim Nordstrom. It’s amazing what scoring one goal can do for a guy. Nordstrom scored his first NHL goal on Friday night, and that seemed to give him a world of confidence for the remainder of that game and the next game. He was a lot more patient with the puck and did not hesitate to shoot when he had the chance. This is a real good sign for the Hawks moving forward.

Coming up this week, the Blackhawks head to Carolina on Tuesday night, then come back home for games against St. Louis and Toronto on Thursday and Saturday night, respectively. Dave Bolland will be making his first trip back to Chicago in that game on Saturday night.