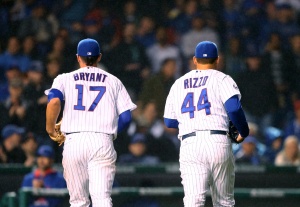 In 24 hours from now, the game will have been played, a team will have won, and a memorable moment or two will be etched in our minds for the foreseeable future. Either we’ll (hopefully) be talking about a Cubs-Cardinals showdown in the NLDS, or once again next year. But in all honesty, regardless of what happens in tonight’s Wild Card game between the Cubs and Pirates, there’s reason to be optimistic about this Cubs team for years to come.

This was supposed to be a “stepping stone” season for the Cubs, meaning they would hopefully win around 84 games and begin their push towards sustained success with their mostly homegrown talent. Instead, the train arrived a bit early on the north side, and we witnessed this team reel off 97 wins; good for third best in Major League Baseball.

This massive turnaround from last season to this season started last October when the Cubs announced that they had hired Joe Maddon to be their next manager. Then a couple months later, Jon Lester signed on to become what we thought would be the Cubs’ newest ace. The pieces were all coming together.

In spring training we saw Kris Bryant display his full offensive potential while lighting up the Cactus League and becoming the talk of baseball. Lost in his publicity was the performance of other top Cubs prospects such as Addison Russell, Kyle Schwarber, Jorge Soler, and even Javier Baez who knew he had to turn his game around after a disappointing late summer last season.

None of those guys made the Opening Day roster other than Soler.

After just a couple weeks of the regular season had passed, we finally got the much anticipated arrival of Kris Bryant in the big leagues. Not long after, Addison Russell followed him. Then in mid-summer, Kyle Schwarber arrived way ahead of schedule and turned heads instantly. These guys surrounded Anthony Rizzo in the lineup to create what has to be one of the most feared rosters in baseball.

Following the All Star break, Jake Arrieta started to take over all of baseball en route to what was a Cy Young-worthy season, and one for the record books.

The rest is history.

That this Cubs team won 97 games with such little MLB experience from most of their key offensive contributors is mind blowing. The confidence that these guys have displayed all season long and even heading into tonight’s Wild Card game has been incredible. This new wave of Cubs players may only be in their early 20’s with limited big league experience, but you would never know it. And a lot of that has to do with the leadership of Anthony Rizzo taking these rookies under his wing and instilling in them the right kind of attitude.

After watching this team do what they did this year while taking into account their youth and the fact that they are all under club control for a number of years to come, one can’t help but wonder just how good the Cubs could be in a few years down the road when these “kids” hit their prime. It’s almost scary…

So regardless of what happens tonight, just remember this is only the beginning of what should be many years of success for the Cubs. For what may be the first time ever, we finally have a team that seems destined for a title before too long.