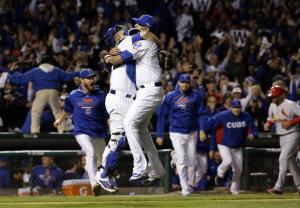 Tuesday was a historic day in Chicago and at Wrigley Field on the city’s north side. For the first time in the history of the Friendly Confines, a postseason series was clinched on its turf. And given how the Cubs won their National League Division Series, you may say it was worth the wait.

This series also marked the first time ever that the Cubs and Cardinals squared off against each other in the playoffs. Each franchise has been around for over a century, but never had they met in the postseason until this year. The fact that the Cubs were able to win their first ever playoff series at Wrigley Field and that it came at the expense of the Cardinals made this victory that much sweeter.

Cubs fans have been told all about these promising young prospects down on the farm for the past three years or so, and how they would one day be the faces of the franchise. Well, we weren’t lied to. It was those once “promising prospects” that won this series over St. Louis in four games.

Baez, Bryant, Castro, Rizzo, Schwarber, and Soler all went deep at least once in the NLDS and accounted for 9 of the team’s 10 home runs hit in the series. It was a power-barrage unlike anything that we’ve ever seen before. If teams around the MLB weren’t already aware of who the Cubs are and just how good they can be, they sure are now.

By defeating the Cardinals, the Cubs won just their second postseason series since 1908 and are now returning to the NLCS for the first time since 2003. Let those stats sink in for second.

These last two games played at Wrigley Field were unlike anything any of these Cubs players have ever witnessed before. The stadium was deafening for each home run, big hit, two-strike count on an opposing hitter, and basically for every out made by the Cardinals. Word on the street is that the Wrigley Field press box even shook a few times due to the bedlam taking place in the stands, and that was just for the NLDS. The atmosphere at Wrigley from here on out might be something that none of us, not just the players, have ever seen before.

The Cubs haven’t played in a World Series since 1945, and they haven’t won one since 1908. Over the course of the last century, the Cubs and their fans have been tortured time and time again by bad breaks and bad luck. It’s been a tradition of heartbreak and losing for the Cubs, thus their old nickname of the “Lovable Losers.”

I say “old” because this is a new team with a new attitude and a new identity. Just a year ago, they won only 73 games while finishing in last place in the NL Central Division. Jump ahead to this season, and they’re a 97-win ball club with unparalleled confidence and swagger. They are too young and too dumb to realize the amount of pressure that they’re actually under to finally win a championship. They also couldn’t care less about any goat, black cat, fan interference play, or anything else that people like to stack on to that list. It is because of that mindset, due in large part to their manager Joe Maddon, that this team may just be the perfect combination of players to finally win a World Series for the Cubs.

The Cardinals were without a doubt a stiff challenge, but with the stakes raised even higher now in the NLCS, the Cubs can expect their toughest opponent yet in either the Mets or Dodgers. People want to say “I’d rather play the Dodgers!” or “I want to play the Mets!” To me, that’s the worst thing you can do. The second you wish for a certain opponent, they beat you. Just let that other series play out and take whoever you get. Have confidence in the Cubs for once, and quit worrying about their opponent.

The Cubs are on to the the National League Pennant, and now is when things start to get real. This should be a fun couple of weeks.