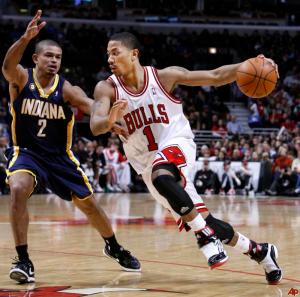 Tonight is the first meeting between the Bulls and Pacers since Indiana beat the Bulls in Chicago 95-90 in late January. It was after that game that Derrick Rose said he would not forget the way the Pacers acted after winning.

As the final buzzer rang to end the game, the Pacers’ players and coaches began jumping around like they had just won a playoff series. What they had done was hand the Bulls their first home loss of the season, which is a nice accomplishment, but not worthy of a playoff-type celebration. Immediately following the game, Derrick Rose stated that he could not wait to play the Pacers again and that he would be seeking revenge for not just the loss, but for the actions of the Pacers. If there is one thing you should never do to a star and dominant athlete, it’s to never make them angry.

Aside from the incidents that took place the last time these two teams met, the biggest story heading into tonight’s game has to be that both teams are currently in the middle of 6-game winning streaks. The Bulls and Pacers are arguably playing their best basketball of the year right now with the Bulls sitting in the number 1 spot in the East, and the Pacers in the number 3 spot. With that said, tonight’s game is going to prove to be a huge measuring stick for the Pacers. They will find out just how close they are to being able to play with arguably the toughest team in the NBA. As for the Bulls, they need to prove to themselves tonight that they can beat the Pacers without much of a problem. After the way that Indiana stuck with the Bulls in just about every game during the Eastern Conference Quarterfinals last year, my guess is that the Bulls are at least a little worried about playing them again. The fact is, however, that the Bulls are a much better team than the Pacers, and like I said, they need to prove this to themselves with a big win tonight.

It is going to be an intense and emotional game tonight for the players on both teams, especially Derrick Rose. I wouldn’t be surprised if he put up one of his best games of the year tonight after the comments that he made following the last meeting between these teams. I know one thing is for sure, and that is that I’ll be glued to the TV from 7:00-9:30 tonight.

For anyone wondering, the game is on WGN and it starts at 7:00.