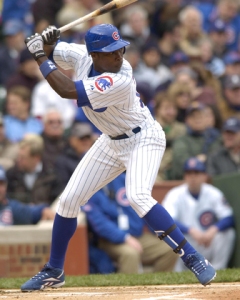 Dale Sveum was asked a few days ago about the possibility of putting Alfonso Soriano back into the lead-off spot in the Cubs’ batting order to start the season. His response has me a little worried. Sveum, in so many words, said that “Soriano is not a bad lead-off hitter and that his statistics prove it.”

It has been obvious that ever since joining the Cubs, Soriano’s legs have completely given out on him. He was once considered to be one of the fastest guys in all of baseball, but now is far from it. The past few years that he has spent with the Cubs have consisted of multiple leg injuries that have only helped to weaken his leg strength. Given his bad on-base percentage and the fact that he no longer has good legs under him, he should not be batting lead-off.

I understand that Dale Sveum is going to evaluate all of his options in deciding the batting order to start this season, but experimenting with Soriano in that spot of the order should not even be one of his considerations. Personally, and based on the way it worked out last season, I like either Darwin Barney or Starlin Castro batting first in the order.

1 thought on “Soriano At Lead-off?”