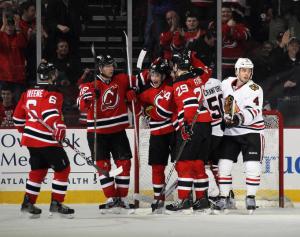 The New Jersey Devils beat the Blackhawks in a shootout tonight by a final of 2-1. One could say that the outcome of this game was determined by the play of Martin Brodeur.

About the first 10 minutes or so was all Devils. They were dominating the Hawks in just about every aspect of the game. Corey Crawford was forced to bail his teammates out a couple of times by making some big saves. Then, with just over 7 minutes left in the first period, Brent Seabrook took a hooking penalty to put the Devils on the powerplay.

The first minute and a half of the powerplay was played pretty well by the Blackhawks. They did a decent job of clogging up the passing lanes and were able to clear the puck a couple of times. However, with only about 10 seconds remaining on the Devils powerplay, Dave Bolland attempted to clear the puck down to the Devils’ end of the ice. The puck ended up hitting the linesman right in front of the Chicago bench and deflected towards center ice where it was picked up by the Devils. The Blackhawks, however, were anticipating the puck going all the way down into the New Jersey end, and therefore attempted to make a line-change. When the puck was picked up at center ice by the Devils, they caught the Hawks in the middle of their line-change, which lead to an odd-man rush and eventually the first goal of the game by New Jersey.

After gaining control of the puck following a face-off, Dave Bolland made a great pass to a wide open Brent Seabrook who hammered home a slap shot from a few feet inside the blue line. This tied the game at 1 a piece. The Hawks would get a handful of scoring chances following that goal, but Martin Brodeur continued to show why he is arguably the best goaltender of all time.

The game would move into overtime, where the Hawks had to kill off just under a minute and a half of a Devils powerplay. The Blackhawks did end up successfully killing the penalty without allowing any real good scoring chances.

In the shootout, Patrick Sharp scored the Hawks’ lone goal, and Patrick Elias and Travis Zajac tallied for the Devils giving them the 2-1 victory and 2 more points in the standings. The Blackhawks earned 1 point in tonight’s game.

For the most part, the Hawks looked pretty good tonight. Their team defense was above average, Corey Crawford made some big saves when he had to, and they out-shot the Devils 38-22.  It was really nice to see Crawford have a good bounce-back game after being pulled early from the game Sunday night against Nashville.

Now, it’s time for me to rant.

The NHL needs to eliminate shootouts. It’s a terrible way to lose a game. You play a full, tough, 65 minutes (including the 5 minute overtime), and then have to lose in what is basically a showcase of individual talent. Shootouts come down to which team has the best snipers and “trick-shot” players. It’s no longer a team game. In place of the shootout, the NHL should add on a 5 minute, 3 on 3 overtime period after the 4 on 4 overtime is over. If no one has scored after both the 4 on 4 and 3 on 3 overtimes, add another 5 minute, 3 on 3 overtime. I know that all pro sports are trying to minimize the lengths of their games from start to finish as much as possible, but the shootout needs to go.

With that said, I am pleased with the effort shown by the Blackhawks tonight. Unfortunately, they came face-to-face with one of the best goalies of all time playing at the top of his game. The Blackhawks remain in the number 6 spot in the standings with 93 points, 3 points behind Nashville, and 6 points ahead of Dallas. New Jersey also sits in the 6 spot in the East, 4 points behind Philadelphia, and 4 points ahead of Ottawa.