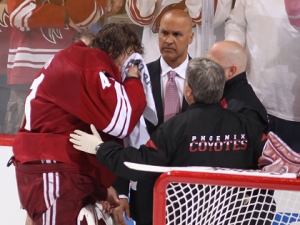 Well, just when you thought Brendan Shanahan couldn’t be much more inconsistent with his handling of suspensions, he pulls this out of his hat. Shanahan announced today that Blackhawks forward Andrew Shaw has been suspended 3 games for his hit on Coyotes goalie Mike Smith on Saturday night.

That kind of makes you scratch your head, doesn’t it? Smith was NOT injured on the play, and Shaw has NO history of suspensions or fines. So is Shanahan saying that if Smith was injured, or if Shaw did have a history that Shaw would have been suspended basically the rest of the playoffs? This is an absolute joke!

In Game 1 of the Red Wings and Predators series last week, Shea Weber of the Predators punched Henrik Zetterberg in the head, and then grabbed the head of Zetterberg and slammed it into the glass as the third period ended. He received a $2,500 fine, which is basically a tiny slap on the wrist. Isn’t the NHL trying to eliminate head-shots? Isn’t what Weber did as clear of a head-shot as they get? Yet all he got was about as small of a fine that the NHL could possibly hand out, and nothing else.

In Andrew Shaw’s case, he skated in behind the net at full speed to try and get to the puck before Smith could play it, but ended up colliding with Mike Smith. If you watch the replay, Shaw had his head down looking at the puck the entire time. When he got to the puck, his shoulder hit the head of Mike Smith knocking Smith to the ice. Smith stayed down for a couple of minutes before getting back up to play the rest of the game. Meanwhile, Shaw was given a 5-minute charging penalty, a game misconduct, and now a 3-game suspension.

After the game, Mike Smith made a statement through the Coyotes PR department that he was “100 percent.” However, Smith was held out of Monday’s practice for undisclosed reasons, and wouldn’t talk to the media. In the NHL, the only time that a player is allowed to avoid speaking to the media is when the player is under “extreme circumstances.” In this case, the Coyotes made it seem like Smith was having concussion symptoms after all even though they said he was “fine” after Game 2. Today, Smith was back on the ice for practice and is listed as a “game-time decision,” leading most to believe that he will in fact play. The bottom line here is that it seems as though the Coyotes have been milking the system the past few days to try and make it look like Smith did in fact get hurt on the play, all in an attempt to increase Shaw’s suspension length. With that said, Brendan Shanahan stated that “Smith was not injured on the play,” and that factored into the suspension of Andrew Shaw. None of this adds up or makes sense.

Here is my question:

Are players now supposed to stand by and simply watch as goalies go to play pucks in behind the net? Based on the suspension of Andrew Shaw, that sure seems like what Shanahan and the NHL want. Players are going to be scared of trying to play pucks behind the net while the goalie is back there with the fear that they might get suspended if they touch the goalie. Basically, goaltenders are now going to have free reign of the area in behind the net whenever they would like.

Brendan Shanahan has handed out a number of questionable suspensions this year, but none of them have puzzled me more than this one. He better have a new job next season, or else there will be a lot of angry people in the NHL.

Here are the replays of Weber’s “head smashing” and Shanahan’s explanation for his suspension of Shaw: