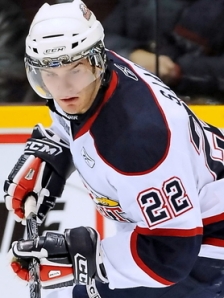 Chicago Blackhawks’ 19-year-old rookie forward, Brandon Saad, was placed on the Blackhawks’ active roster following Tuesday night’s Game 3. He was called up from the OHL to take the place of Marian Hossa in the lineup.

The end of Saad’s OHL season could not have come at a better time. His team’s playoff run came to an end this past week, thus allowing the Blackhawks to bring Saad up to join the NHL team for the remainder of the playoffs. Most were not expecting Saad to get any playing time, but rather to simply be around the NHL guys and get some playoff atmosphere experience. However, most people were also not expecting Raffi Torres’ hit on Marian Hossa.

Due to the injury(s) that Hossa suffered from the hit by Torres, he has been forced out of the Blackhawks’ lineup. This left one spot open for the Hawks to fill. Rather than going with Jimmy Hayes, who has played a handful of games this year in the NHL for the Hawks, they have decided to dress Brandon Saad. Their reasoning? Well, Saad is more of a skilled player and a scorer.

In just 44 regular season games in the OHL this year, Saad recorded 76 points (34G, 42A). In the OHL playoffs, he recorded 8 goals and 9 assists in 12 games. Those are some staggering offensive numbers, especially for a 19-year-old.

The hope is that Saad will bring some much-needed offense to the lineup that was lost when Hossa left Game 3 with what appeared to be a head injury. Blackhawks’ coach Joel Quenneville has not disclosed his lines for tonight’s Game 4, but odds are that Saad will be placed on one of the top 2 lines for the Hawks. His style of play fits the play of those 2 lines better than it does on either the third or fourth line. My guess is that Saad will be on the first line with Jonathan Toews and Patrick Kane. By placing him with the two most talented players in the lineup, Saad is bound to find himself with some scoring opportunities. Also, with the way that Sharp, Kruger, and Stalberg finished up the season together, it would be hard to imagine Quenneville splitting up that line. I am very excited to see what Saad will bring to the table for tonight’s game.

The Blackhawks are going to need their top 2 lines to produce points on a consistent basis from here on out with Hossa being out of the lineup. Even though he hadn’t been scoring many goals of late (0 in his last 10 games), Hossa is still one of the most dangerous players in the NHL, not to mention his skill on defense as well.

Tonight is a must-win game for the Blackhawks. They do not want to go back to Phoenix down 3-1 in the series.