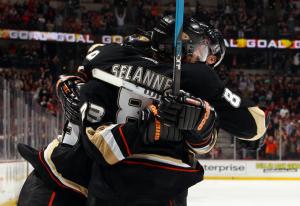 Last night’s game between the Ducks and Blackhawks in Anaheim lived up to its hype. Everyone was hoping and expecting to see a fast-paced, close, and exciting game, and was it ever. Unfortunately for us Hawks fans, the result was not what we were hoping for.

With a litter over 5 minutes left in the game, Bobby Ryan scored the game-tying goal after Corey Crawford gave up a big rebound off of a Ryan Getzlaf shot from the right circle. There was really no way for Crawford to avoid giving up the rebound.

Then just 64 seconds later, Teemu Selanne scored after a bad Blackhawks turnover, and the Ducks were up 3-2. In a matter of seconds, the Hawks went from having the lead to trailing in the game.

Sheldon Souray would add an empty net goal with 21 seconds left in the game to make it 4-2.

So, what did we learn from last night’s game?

Jonathan Toews is a beast. This is something that we knew already, but I just want to reiterate it. His shorthanded goal last night (much like the one against Colorado a couple of weeks ago) was a perfect example of him outworking and out-hustling everyone else on the ice to score a goal. Toews is arguably the best two-way forward in the game, and he proved this once again last night.

We also learned that the Hawks still have not fixed their late-game issues. Too many times this year, the Blackhawks have blown, or come close to blowing their leads late in games. I mentioned this in an earlier blog this year, and things have not changed. Just to point out a couple examples of this, look back at their games against the Ducks on Feb. 12 , L.A. on Feb. 17, Vancouver on Feb. 19, and last night’s game in Anaheim. Last night was the only one of those games that they lost, but in the other three, the Hawks almost cost themselves the game because of allowing late goals to the opposition. What I have noticed is that sometimes while playing with the lead in the third period, the Hawks will revert to playing strictly defense. It is as though they have decided to try and play “keep away” instead of continuing to attack the other team and add to their lead. Last night the Blackhawks did a better job of trying to add to their lead, but they still gave up 2 late goals that cost them the game.

Another thing that we learned by watching the Hawks and Ducks play last night is that the Ducks are a much bigger, more physical team. Come playoff time, that is going to benefit the Ducks in a big way. Right now, the Blackhawks are a great regular season team. They have a ton of speed and skill, as well as a good defense and two decent goalies. In the

regular season, those things will get you a lot of wins. Come playoff time, however, the game becomes much more physical. Games are won and lost along the boards and hitting becomes a major factor in the outcomes of games. The Ducks are built perfectly for the playoffs. They have a number of big, physical forwards and defensemen who are not afraid to throw their bodies around and try to hit guys through the glass. That includes their star players like Perry, Ryan, and Getzlaf. The Blackhawks are not like that. Their game revolves around speed and finesse players. The star players of the Hawks are not nearly as physical as those of the Ducks. Unless they improve on their size and toughness before the playoffs, this is going to be a big issue for the Blackhawks in the postseason. That is a fact.

I am not saying that the Hawks are going to be bounced from the first round again like they were the last two years, but if they meet up against a team like Anaheim (or Boston for that matter..) in the playoffs, they are going to have some trouble with their physical forwards and defensemen.

For the time being, however, these four days off should really benefit the Hawks. Patrick Kane needs as much rest as he can get after double-shifting in Marian Hossa’s absence the last two games. Hopefully Hossa will be back in the lineup for Monday night’s game against L.A., who oh by the way, has regained its Stanley Cup form from a year ago.