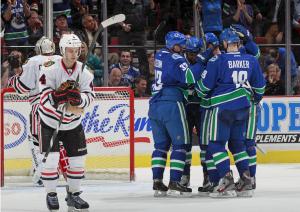 I’ve been saying it all season, and I’ll say it again. The Blackhawks are not a tough team, and they are not a physical team. Last night’s game in Vancouver proved just that. The Canucks were on a mission to hit anyone wearing a white sweater, regardless of the name on the back. The result? A 3-1 pounding of the Blackhawks. If anyone out there was looking for a prelude to what the playoffs may be like, or how to beat the Blackhawks, just go back and watch a recording of last night’s game and focus on the blue team.

About a week and a half ago, the Blackhawks won a big game on a Sunday afternoon in St. Louis. At the time, it looked as though the Hawks were capable of playing through intense physicality from the other team. The Blues were taking runs at the Hawks the entire first period of that game, but the Blackhawks were able to work through it and come away with a good win. Last night, however, proved that the Blackhawks can’t always rely on their skill and speed to get them through tough, physical games.

The Canucks outhit the Hawks 37-23, and in the process sent a clear message: “If you guys (the Hawks) want to make it through the playoffs, you need to be physical.” Well Vancouver, the message was received. The NHL playoffs take physicality to an entirely new level compared to the regular season. Teams who can play physically and with skill tend to do very well. Just look at the 2010 Blackhawks for proof.

This year’s Hawks team was not built to be physical. They were not constructed to outhit their opponents on a nightly basis. However, that doesn’t mean that they should just sit back and let their opponents obliterate them all night long with hard, bone-crushing hits.

Last night, the Canucks destroyed the Hawks with their physicality, and there was virtually no response from the visitors. Sure, about half way through the third period and down 3-0 some Blackhawks players started hitting, but that was way too little, way too late. So my question is this. Why did it take the Hawks two and a half periods to start hitting? Also, why didn’t anyone step up and respond to guys like Ryan Kesler who were taking runs at the Hawks’ star players all game long? When you see someone taking borderline cheap shots at your captain, it’s time to go out there and respond by either doing the same thing to their stars, or go after the guy(s) delivering those shots. Pat Foley and Eddie Olczyk mentioned this a few times as the game went on.

With the playoffs starting in about a week, the Blackhawks need to figure out how to handle teams like Vancouver who can combine skill and toughness to win games. The first round will be physical for the Hawks, but none of their potential first round opponents are nearly as physical as Vancouver. At some point, however (if the Hawks advance in the playoffs), they are going to meet a team like Vancouver, L.A., or St. Louis who will use their toughness as a primary weapon, and the Hawks are going to need to respond.

The Blackhawks and us fans cannot rely on Brandon Bollig, Daniel Carcillo, and Jamal Mayers to be our “big hitters” for the playoffs. Those guys see little ice time each game, and at least one is a healthy scratch each game. This means that guys like Bickell, Stalberg, Shaw, Handzus, Seabrook, Rozsival, Keith, and maybe even Saad or Toews need to become more physical to counter their opponents. It needs to be a team effort, not just one or two guys.

Maybe last night was a good thing for the Hawks in that they are now fully aware that they need to alter their game in order to beat a very physical team in the postseason. At least one thing is for sure, however, and that is the Blackhawks received a very stern message from one of the league’s better teams. If this team is going to go on any type of run in the playoffs, they need to step up and respond to other teams’ physicality. That’s a fact.