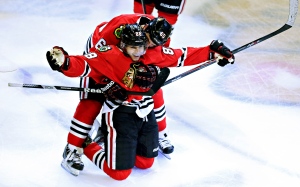 I already posted my prediction on how the Stanley Cup Final between the Blackhawks and Bruins will end. I said the Blackhawks will win in 7 games. While I am sticking with the prediction that the Hawks will win the series, who knows how many games it may take… Logic just says it’ll be 7 games based on how good both teams are. In that write-up in which I have my series prediction, I also threw some stats out there and gave a few opinions on both teams. Here, I will give my take on how I think the Blackhawks can win this series and bring the Cup back home.

Let’s start with my keys to success for the Blackhawks.

To build off of my first “key” of the top 2 lines producing for the Blackhawks, let me say this. Yes, Boston is one of the league’s best defensive teams. That is not a question. However, I don’t believe that they are as good as they may have appeared to have been against Pittsburgh. Holding a team to just 2 goals in a 4-game sweep is unheard of. While the Bruins did play great defense against the Penguins, I think Pittsburgh had a lot to do with how that series played out as well.

The Penguins got away from their game plan and the style of play that they were using all season long. Instead, they tried becoming enforcers and tried to get into the heads of the Bruins by being a physical team, which they’re not. There was no better example of this than Sidney Crosby going after Zdeno Chara in Game 1. That is not the Crosby we know. In trying to change the way they played against Boston, the Penguins did just that. They got away from their smart, offensive-minded game plan that got them to the Conference Finals in the first place, and it cost them. They shot themselves in the foot that series, which led to poor play and a sweep. Yes, the Bruins were good defensively, but they got some help from the Penguins as well.

I honestly do not think that Boston will be able to hold Chicago’s top guys scoreless in this series. In fact, I don’t think they will shut them down like many are predicting. Patrick Kane and Jonathan Toews are playing their best hockey of the postseason right now since being reunited on the top line (along with Bryan Bickell), and I don’t see the Bruins stopping them. If they do limit the Hawks’ first line, then there is the second line of Sharp, Handzus, and Hossa to worry about.

Patrick Sharp is tied with Bickell for second place in goals-scored this postseason with 8, while Marian Hossa has 7. Sharp and Hossa have been arguably the two most consistent players for the Blackhawks this postseason, and they are as dangerous of a second line as you will find. Michal Handzus has become a key player for the Blackhawks on the second line, and he has seemingly found some great chemistry with Hossa. If Boston does find a way to slow down the Blackhawks’ first line, they still have the second line to be concerned about. I haven’t even mentioned Chicago’s third and fourth lines.

The Blackhawks’ third line of Stalberg, Shaw, and Saad is a huge reason as to why the Blackhawks have made it this far. Andrew Shaw, while he has only 4 goals this postseason, has been a very valuable asset to the Blackhawks’ offense. He is physical, he’s an agitator, he’s fearless, and he is getting better and better at camping in front of the

net on the power play. Viktor Stalberg has been disappointing up to this point and often receives the lowest playing time on the team, but his speed makes him a constant threat. Lately, he’s been getting more chances to produce, but hasn’t converted. As for Calder Trophy finalist Brandon Saad, his statistics are misleading. He has just 4 points (all assists), but is one of the best play-makers in the lineup. He often looks a lot like Toews and Hossa with his ability to maneuver through the defense with the puck to get to the net.

The fourth line of Frolik, Bolland, and Kruger is at times the best defensive line for Chicago. They will most likely play against David Krejci’s line in this series. As I stated earlier, look for David Bolland to pick up his game this series. He has been invisible for far too long, and it’s time for him to show up. If this line and/or the third line can get a handful of goals against Boston, the Blackhawks should be in good shape.

Defensively, Keith and Seabrook will have their hands full going against Boston’s top line. I am confident that they will get the job done. However, I will say again that the Hjalmarsson-

Oduya pairing will have a big impact on how this series plays out. Niklas Hjalmarsson is playing his best hockey of the year right now, and he’ll need to continue doing so. Johnny Oduya has looked good at times as well, but he has made way too many turnovers at others. He needs to be smarter with the puck in his own end and the neutral zone. If he can do that and be where he needs to be on defense, and if Hjalmarsson continues his hot play, I again like the Hawks’ chances.

I briefly eluded to this in my series prediction, but I’ll say it again. Boston has not played a team with as much speed as Chicago. They have not played a team who can use the stretch pass as effectively as Chicago. The Bruins will need to respect both the Hawks’ speed and stretch pass capabilities in this series by playing a conservative defense, which should open up some other chances for the Blackhawks. Chicago will need to have a good forecheck in this series, as Boston will most likely clog the neutral zone on defense.

The Blackhawks’ biggest weakness right now besides their power play is their ability to win faceoffs. They have won 47% of their draws this postseason, while Boston has won 56% of theirs (that’s the best of any playoff team). This is the biggest difference between the Bruins and Blackhawks. While the Hawks were able to win games against L.A. despite their inability to win faceoffs, they’ll need to be at least a little better against Boston. Not many teams can still be as good after losing the faceoff as the Chicago, but they can’t count on losing that many draws and being successful in this series.

There are so many different aspects of this series that can be discussed, but these are the biggest ones for the Blackhawks. If they can play the way they did against L.A., which I think they will, I like their odds. Boston is going to be the toughest challenge for Chicago since maybe the Red Wings in the ’09 playoffs, but this Blackhawks team is more than capable of winning.