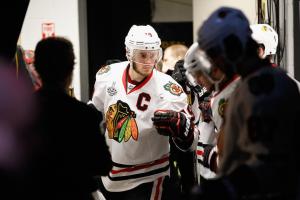 There have only been a couple of times this year when the Blackhawks have faced some major adversity. The first being when they fell into a 3-1 hole against Detroit in the Western Conference Quarterfinals, and the second being right now at this very second. Currently, the Blackhawks trail the Bruins 2-1 in the Stanley Cup Final, which probably doesn’t seem like a huge deal to a casual fan. However, I am here to say otherwise. Tonight’s Game 4 is a MUST win for the Blackhawks.

After losing Game 2 at home to the Bruins, the Blackhawks’ main goal heading into Games 3 and 4 in Boston was to win at least one of them. Even though they lost Game 3, they can still achieve their goal by winning tonight.

With a win in tonight’s game, the Blackhawks will even the series up at 2 apiece and regain home-ice advantage in the series heading back home for Game 5. What more could you ask for at this point? If they lose tonight, however, they will go down 3-1 to a Boston team that will almost certainly finish off the Hawks in one of the next 2 games and not let them back into the series, unlike Detroit. That is why this Game 4 is a must win.

Tonight’s game will say a lot about the Blackhawks’ character and what they’re made of. They absolutely need to play all 60 minutes like it is Game 7. They need to give 110%

every second of every shift. They need to go all-out and win the board battles, win the foot races to the puck, win the area in front of the crease, and win the battle of desperation. They have done this before against Detroit when they went down in the series 3-1, and they did this in the third period of Game 4 against the Kings, in L.A. If they cannot do these things tonight, they will lose. Boston plays like the best team in the NHL when on their home ice, and therefore you must play a nearly perfect game of hockey to beat them at the TD Garden. They will be going for the “kill” tonight against the Blackhawks, and the only way to stop them is by playing the way I just described a few sentences ago.

Obviously, the Blackhawks know the situation that they’re in, and they know that they have to win tonight. Joel Quenneville stated yesterday, “Very important game tomorrow night. We have to win tomorrow night.” You don’t often hear him say those words. When faced with this type of situation in these playoffs, the Blackhawks have stepped up and answered the bell. Hopefully they can do it again tonight.

With Marian Hossa being absent from the lineup in Game 3, Joel Quenneville put Ben Smith in his spot. This set off a chain reaction of line changes throughout the game, and subsequently the Blackhawks never looked comfortable the whole night. They were playing with guys that they normally wouldn’t (Kruger-Toews-Frolik as an example), and they seemed out of rhythm.

This morning, Marian Hossa missed the team’s morning skate, but Coach Q stated afterwards that Hossa is “fine,” and they expect him to play tonight. That is a very encouraging sign for the Hawks and us fans.

As for the what the lines may look like tonight, here you go:

These were the line-rushes at today’s morning skate, minus Marian Hossa. Finally, Quenneville has apparently opted to reunite Bickell, Toews, and Kane like he did late in the series against L.A. That line was dominant. The second line of Sharp, Handzus, and Hossa was pretty darn good too. Sharp and Hossa have always had some chemistry, but Hossa and Handzus seem to have generated some as well over recent weeks.

We will now get to see how Boston will try and handle the duo of Toews and Kane. Kane is much better with Toews as his center because of Toews’ speed, and Kane is a lot more effective with fast line mates than he is with slow ones like Handzus. These line changes should also benefit Bryan Bickell as well, because now a lot more focus will be placed on his two line mates rather than himself.

I am confident that the Blackhawks will play a much better game tonight than they did in Game 3. This team has stepped up when they have needed to all year, and I don’t anticipate anything different tonight.