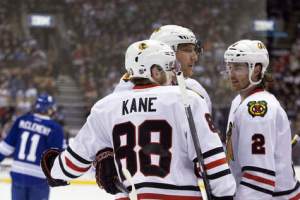 Patrick Kane and Duncan Keith are each having arguably their best seasons to date as NHL players, and that’s saying something. Patrick Kane won the Calder Trophy as the league’s best rookie back in the 2007-2008 season, and Duncan Keith won the Norris Trophy as the league’s best defenseman in 2010. Yet both players are currently performing at higher levels than we’ve ever seen. Kane is in the thick of the Hart Trophy race (league MVP), and Keith is considered by all hockey analysts as the leading candidate to win the Norris Trophy, again.

behind Sidney Crosby. Kane previously had a career best 12-game point streak earlier this year, and he is currently riding another 10-game point streak. How many guys in the NHL can say they’ve even had ONE 10-game point streak in their career? Kane continues to come up with goal after goal, assist after assist, and he’s been a major reason as to why the Blackhawks’ powerplay is so good this year.

Duncan Keith also had his best season during the ’09-’10 campaign when he put up 14 goals and 55 assists, and won the Norris Trophy. This season, he has 3 goals to go along

with 29 assists. His 29 assists put him just 3 away from the league lead, and he’s a defenseman. Aside from his offensive number, Keith is without a doubt playing his best defensive hockey of his career. You would be hard pressed to find a night this season when Keith hasn’t been the best d-man on the ice during a Blackhawks game. His ability to read the opposition’s offense and get in the way of the passing lanes is almost surreal. He has one of the best, most active sticks I’ve seen and always finds a way to come up with a nice poke check or deflection to break of the opponent’s offensive rush. Keith is also a part of the Hawks’ number one powerplay unit where he has been a huge contributor this year. His awareness when it comes to knowing when to shoot and when to pass with the man advantage is as good as it gets.

Both Kane and Keith are due to go through a rough patch at some point this season, but I wouldn’t expect them to be long ones. These guys are two of the best players at their respective positions in the world. Right now, they are playing at the highest level they have ever played, and they have been a HUGE reason for the Blackhawks’ success up to this point. If both players continue to play at this elite level, I’d expect at least one of them to walk away with an award at the end of the season. Right now, I’d give the edge to Duncan Keith over Patrick Kane in that regard, but I wouldn’t put it past Kane to win the league’s MVP.