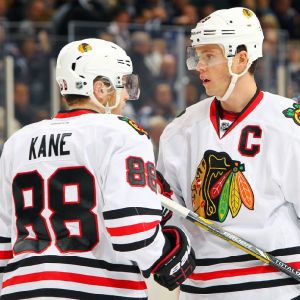 A few weeks back, Patrick Kane was injured during the Blackhawks’ tilt with the St. Louis Blues at the United Center. Shortly after, he was ruled out for the remainder of the regular season with a “lower body injury.” A week and a half later, Jonathan Toews was injured during the second period of the Hawks-Penguins game after a bone-crushing hit from Brooks Orpik. Like Kane, Toews was ruled out for the rest of the regular season. Many, myself included, thought the Blackhawks would go into a tailspin and struggle to win games for the remainder of their schedule. That, however, has not been the case.

The Blackhawks are currently riding a three-game winning streak after wins over Minnesota, Columbus, and St. Louis (all playoff teams). They trail the Avalanche in the standings by two points, while Colorado has a game-in-hand. During this three-game winning streak, multiple Blackhawks players have had a chance to step up and make their mark on the team in Kane and Toews’ absence. Guys like Andrew Shaw, Jeremy Morin, Ben Smith, and Peter Regin have stepped up their game lately and are a huge reason for the team’s recent success.

While one would assume having Kane and Toews injured at the same time is never a good thing, it has actually opened the door for Jeremy Morin to prove he belongs on the Blackhawks NHL roster and in the starting lineup heading into the playoffs. All season long, Hawks fans have wondered why Morin has been stuck down in Rockford while players such as Bollig and Handzus have continued to play every night in Chicago. In the coaching staff’s defense, Morin wasn’t showing any signs of improved defensive awareness in his stints with the Blackhawks earlier this season, thus the reason for him spending ample time in Rockford. Now, however, Morin is back in the Blackhawks’ lineup and he looks like a much-improved player in all facets of the game (see, spending time in the AHL can be a positive).

Morin has scored two goals in the last two games and also added an assist against St. Louis in the Hawks’ most recent game this past Sunday. He’s always been a physical player, but now he is playing a smart physical game rather than running around like a chicken with its head cut off. One aspect of Morin’s game that has really stood out to me is his willingness to crash the net in the offensive zone after a shot. This is how he scored against the Blues the other day. Come playoff time, the Blackhawks (and all other playoff teams) will need some ugly goals to help get them victories, and Morin is the type of guy who will get you those.

Here’s the issue. When Kane and Toews do re-enter the lineup for Game One of the playoffs, two players will have to exit. If I could have it my way, I’d like to see Handzus and Bollig be the ones to get scratched for the postseason. My ideal lines would look something like this:

I think you could flip/flop Shaw and Smith if need be, but for the most part I think those are

the best lines Quenneville could put together. Handzus, while good on the penalty kill, is too slow and not skilled enough to be effective in this lineup. Too often he holds up the rush, makes terrible passes, or gets trapped along the boards due to his lack of quickness and turns the puck over. Bollig, on the other hand, can be a physical presence on the ice, but he has next to zero offensive skill and cannot be trusted in his own end come playoff time. Insert Morin and Regin in place of Handzus and Bollig and you have a lot more skill, a lot more speed, and a much deeper and smarter team.

It is becoming clearer and clearer that Teuvo Teravainen is not in the team’s plans for this postseason as Joel Quenneville continues to not play him. I can’t say I blame the team for not wanting to use up the first year of Teuvo’s contract right now, but I do think he could be a dangerous center on a line with Patrick Kane in the playoffs.

While none of us enjoy having our captain and best playmaker injured at the same time, their injuries have opened the door for guys like Morin, Smith, Regin and Shaw to step up their game leading into the playoffs. I don’t know how much more Jeremy Morin has to do to prove he belongs in the lineup for the postseason, and hopefully Quenneville sees that as well. The Hawks should be healthy come Game One against Colorado, whether it be at home or in Denver, and I think a healthy Blackhawks team can take down the Avs in a seven-game series.