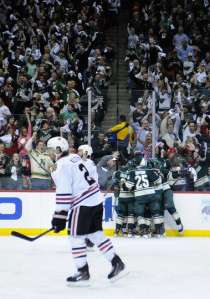 This has to be the lowest point of the entire season for the Blackhawks. After going up 2-0 on Minnesota in this second round series, the Hawks dropped both games 3 and 4 in St. Paul and looked absolutely horrible in doing so. If you really sit back and think about it, the Blackhawks didn’t even look good in either of the first two games of the series in Chicago. The Wild outplayed the Hawks in both games, but couldn’t find the back of the net often enough to win. Most people thought the Hawks would win this series (I thought in 5 games), but now it looks like this could be a potential upset.

Here’s what’s on my mind following these last two losses:

I could continue to go on and on, but those are the major things I wanted to mention. The bottom line is that the Blackhawks need to find their energy again and their desire to win, or else the Wild will no doubt pull off the upset here. This is now a best of three series with the Hawks holding home ice advantage, and while they haven’t played well this entire series, I still think they’ll advance to the next round.