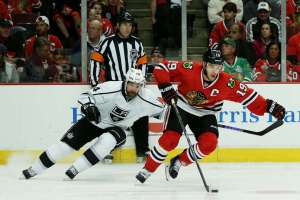 We’re through two games of the Western Conference Final already, and things are dead-locked at one game apiece. I don’t think anyone predicted either team to come away with a sweep, and we now know that we will not get a sweep from either team. After watching the first two games between the Hawks and Kings, it is obvious that these two teams match up very well with one another, and that this series has the potential to go the distance. Both sides are doing certain things very well against the other, and both sides are trying to figure out how to stop the other from being successful in specific areas.

Here’s what has stood out to me thus far.

All in all, this series is completely up for grabs at this point. I wouldn’t look into how the Blackhawks lost Game 2 too much. That was such a horrible collapse that you almost can’t count it against them. They were the victim of a couple soft penalty calls and a weird bounce/no-bounce of the puck behind Corey Crawford in the third period, all of which led to Kings’ goals. Don’t forget the Blackhawks dominated portions of Game 1 and 38 minutes of Game 2.

The Kings are a weak 3-3 at home these playoffs, and the Blackhawks have been one of the best road playoff teams over the last 5 years. I have all the confidence in the world that the Hawks can win at least one of the next two games in la la land. If they can do that, they will regain home ice advantage in the series.