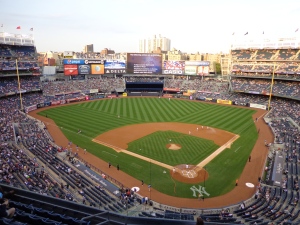 “The Cathedral” as it’s often called, is baseball’s mecca. It seems that every baseball player wants to one day play a game at Yankee Stadium. While the old stadium that watched Babe Ruth, Lou Gehrig, Mickey Mantle, and many other legends take its field no longer exists, the new and current Yankee Stadium still possesses that certain “aura.” Recently, I was able to take in a Red Sox-Yankees game at the new stadium, and while there’s no doubt it is a nice stadium, nothing about it really stood out to me.

The outside of the stadium is all white/tan cement, similar to the old park. It is very “neat” looking and has somewhat of an old-fashioned feel to it. As for the area surrounding the park, don’t go touring it. I spoke with a New York City police officer outside the stadium before the game and was told to not hang around the “immediate” ares following the game. That’s not always the most pleasing thing to hear when attending a ballgame.

Depending on which entrance you go through to get into the park, you may enter into the “Great Hall.” This is somewhat of an exterior concourse to the stadium. There are different

souvenir and food stands set up in the hall, as well as massive banners displaying the legends that once called Yankee Stadium their home. Definitely worth checking out. The only downside to this is that the “Great Hall” is completely blocked of the field of play.

The actual concourses at Yankee Stadium were very clean, but could probably have been made a bit wider. Near the ceiling in certain areas, there are pictures of some of the great players that once played for the Yankees, as well as some of the better events to take place in Yankees history. This was a a nice touch.

If you’re a food lover, you’ll probably enjoy Yankee Stadium. There is a wide variety of food available at the park. Everything from burgers and hot dogs, to cheesesteaks and Brother Jimmy’s BBQ (a local favorite) are available around the park, along with other items.

One of the stadium’s best and most famous features is Monument Park. This is an area just beyond the center field wall that fans can walk through and look at the plaques of the Yankees’ greatest players in history. I would have loved to have seen this, however I was unaware that the park closes 45 minutes prior to the start of the game. Something to make note of if you plan on going to a Yankee game. The Yankees also have a museum at the stadium, which is sort of like a Yankees Hall of Fame.

As for the playing field itself and its surroundings, there’s nothing too unique about it. They tried to build this stadium similarly to the old one, and I have to admit the two do look a little alike. The outfield consists of a back drop of big advertisements and a couple of video boards. That’s about it. In centerfield, there is a big party room or restaurant that people and corporations can rent out each game. However, that leads me to my biggest complaint about this stadium.

The big party room/restaurant that I just mentioned was built in such a way that it prevents fans sitting in left and right field from seeing half the field. If you’re sitting in the right field bleachers, you cannot see the entire left side of the field. If you’re in left field, you cannot see the right side of the field. How on earth a brand new, billion dollar stadium could be built with a major flaw like this just blows my mind. This really lost Yankee Stadium some points in my book.

Other than the outfield bleachers, there’s not a bad seat in the house. The upper deck is way the heck up there, but none of its views are obstructed. I will say this though. Yankee Stadium is huge, so the seats are not real close to the field like they are in some other new

parks. I’d say that of the parks I’ve been to, Yankee Stadium and Busch Stadium in St. Louis are the two biggest. The seats at both stadiums are ways away from the field, especially the higher up you get. I’m not criticizing either stadium for that, I’m just pointing it out.

All in all, Yankee Stadium is a very nice and modern stadium. They did a good job of preserving a lot of the Yankee history in this new park, which I was hoping would be the case. There’s a lot at Yankee Stadium that you simply just have to see. Writing about it here won’t do a whole lot of good.