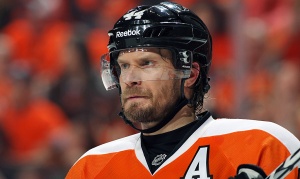 Friday night the Blackhawks traded for 39 year old Flyers defenseman Kimmo Timonen in exchange for a couple of draft picks, including this year’s 2nd round pick. The Hawks badly needed to upgrade their blue line before the trade deadline came and went, and it appears that they have done so. It all depends on Timonen’s health, however.

Kimmo Timonen, a 5-time NHL All Star and 4-time Olympian (Finland), has yet to play in a game this season. Last summer, blood clots were discovered in his right leg and both lungs, which kept him off the ice for quite some time. Since being cleared to resume hockey activities, Timonen had been practicing with the Flyers and was apparently ready to start playing in games again as of Friday. He was supposed to be back in the Flyers’ lineup tonight as a matter of fact, and is likely to be in the Hawks’ lineup on Monday.

In a phone conference after learning that he had been traded to the Hawks, Timonen said that his one goal in returning to play hockey this season is to win the Stanley Cup. That’s it. He also made it clear that it may take him a few games to really get back into “game shape” and back to the level of playing that he is used to. That should come as no surprise.

While we were all anticipating Stan Bowman to acquire a defenseman before the trade deadline on Monday, Kimmo Timonen’s name was not often mentioned as a possible target of the Hawks. Now that the deal is done, let’s take a look at what the Hawks got:

To sum it all up, even though he has yet to play this season, Timonen was a great acquisition for this specific team. Obviously the ultimate decision on this move can’t be made until we see how he performs, but all signs look good at this point.

By getting Timonen, the Hawks now have at least four reliable defensemen on the roster. Maybe even five if Oduya can get back to the way he was playing the last two years. Adding Timonen now also allows Quenneville to reunite Seabrook and Keith on the team’s top d-pairing. That pair is often regarded as one of the best in hockey.

With Trevor van Riemsdyk getting set to return to the Hawks sometime very soon, the defense doesn’t look all that bad suddenly (it’s worth noting that the Hawks placed Tim Erixon on waivers today and sent Kyle Cumiskey back down to Rockford). If the Blackhawks can enter the playoffs with a trio of d-pairings that looks something like Keith-Seabrook, Hjalmarsson-Timonen, Oduya-TVR, I’d be quite happy. There’s no reason it shouldn’t be that way barring another injury.

In other news, it sounds as though Bowman isn’t done trading yet. He told reporters that he would still like to add another forward via trade by Monday. The team still has roughly 4-5 million dollars in cap space, and it appears they are intent on taking advantage of that.

Antoine Vermette and Curtis Glencross have both been heavily linked to the Hawks in trade rumors over the past few days. Vermette, a center, would be the better option of the two. He is a two-way player, is great at the faceoff dot, and would be a great add to a Blackhawks team that could use another center. I’m not so sure that the Blackhawks’ centers (aside from Toews) could truly compete with the centers of the Kings, Ducks, and even Blues as the roster stands right now. With Brad Richards’ decline in performance over the past couple months, it would be great to add a younger and bigger centerman to the Hawks’ second line. This would allow them to demote Richards to the third line and move Shaw his natural wing position, which happens to be where he is most valuable as well.

As for Glencross, he’s got a lot of talent and skill, but he’s a left winger, and the Hawks really don’t need another wing. Obviously the more scoring potential on the roster the better, but when it comes down to Vermette and Glencross, Vermette would be the better fit. Especially if/when Kane comes back in the playoffs.

There are also A LOT of Patrick Sharp rumors out there right now. And by rumors, I mean hockey rumors, and non-hockey rumors… Supposedly the Hawks have had trade discussions with Detroit, Montreal, and Washington regarding Sharp. That was reported by a number of NHL reporters and writers. At the same time, however, Sharp’s agent is claiming that the Hawks told him Sharp will not be dealt by the trade deadline. With Kane now out, I think it would be smart to hang onto Sharp unless they’re getting a top 6 forward in return.

As for the non-hockey rumors surrounding Patrick Sharp, they’ve actually been there since last year, but only now is the average fan finding out about them. If I can say one thing, it’s this: Be cautious with what you believe. There are a lot of rumors out there right now, leading me to think that something did in fact happen, but I’m also being real careful with what I choose to see as facts. Where there’s smoke, there’s usually fire, but just how big of a fire? Until that information is leaked and confirmed, take the rumors with a grain of salt. Don’t believe everything you read. If the situation inside the locker room is really as bad as some are making it sound, I think we see Sharp get traded by the deadline. Keep in mind though that this supposed “stuff” was already there before the season even started. It didn’t just happen in the last week.

That’s all for now. The next 48 hours should be fun.