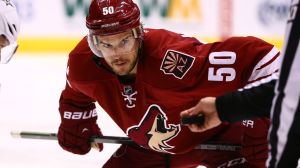 Now that the dust has settled from the trades that brought in Kimmo Timonen and Antoine Vermette, we can really begin to look into what lines we may see from the Blackhawks moving forward. Today was the team’s first practice since their loss in Tampa Bay Friday night, and it was also Timonen’s first with his new team. Vermette did not participate due to travel reasons.

The lines in today’s Hawks practice were Versteeg-Toews-Hossa, Sharp-Teravainen-Saad, Bickell-Richards-Shaw, Nordstrom-Kruger-Smith. After practice, Quenneville indicated that Vermette will center the second line, meaning we might see Teravainen on the third line, Shaw on the fourth, and either Nordstrom or Smith benched. It also wouldn’t surprise me if the Hawks bench Teravainen, even though I think that would be the wrong thing to do.

The defense pairings today were skewed because Keith did not practice. Timonen was paired with Seabrook, however I don’t think that will be the case tomorrow night. If I had to bet on the d-pairings, I’d say they’ll likely be Keith-Seabrook, Timonen-Hjalmarsson, Rozsival-Rundblad.

Kimmo Timonen was also taking reps with the Hawks’ number one powerplay unit today. That unit consisted of Shaw, Toews, and Hossa, with Seabrook and Timonen at the points. I am really looking forward to seeing just how big of a factor he might be on the team’s powerplay moving forward.

Both Timonen and Vermette will be in the Hawks’ lineup tomorrow night against Carolina. Since Vermette did not practice with the team today, it remains a bit of a question mark at this point in terms of how he will be used on the special teams. One would assume he’ll center the second powerplay unit, as well as take faceoffs on the penalty kill, but we won’t really know for sure until he plays.

Also, Timonen will be wearing number 44, while Vermette will wear 80. That makes it four players now wearing a number in the 80’s for the Hawks, in case you were wondering.

According to the local beat writers for the Blackhawks, Brent Seabrook addressed the media on his own today to put the Patrick Sharp and “fight” rumors to rest. He was never asked by the media to address the situations, but felt it was his job as one of the team leaders. To summarize, Seabrook made it clear that the locker room is “tight” and that there are no issues going on in there whatsoever. Jonathan Toews later backed up those statements.

Then Patrick Sharp addressed the reporters and said that the rumors surrounding him are “laughable,” yet have taken a big toll on him. He denied all the rumors and even went so far as to say he is looking into taking legal action against those who reported the rumors on the internet yesterday. Sharp said that these rumors have taken a toll on him and his family, and have even begun to affect his play on the ice. If you want to read more of what Sharp said today, I suggest scrolling through the Twitter timelines of Mark Lazerus, Chris Kuc, and/or Brian Hedger.

The fact that the Blackhawks took it upon themselves to bring these rumors up with the media today tells me that there probably isn’t anything bad going on in that locker room right now. Maybe, and quite possibly, something did happen last year as was first reported by the guys at The Committed Indian. Who knows what that may have been… As of right now though, it would appear all is good in the Hawks’ locker room despite what some morons on Facebook and Twitter are saying.

If in fact all of this crap surrounding Patrick Sharp is false, then I can’t help but feel terrible for him and his family. He has been absolutely degraded through social media over the last week. I don’t blame him for wanting to pursue legal action against those responsible for the rumors if everything really is false.

Hopefully all of this off-ice stuff gets put to rest once and for all very soon and we can begin to focus solely on the Blackhawks’ as a hockey team. There is a lot of reason to be optimistic even despite the Patrick Kane injury.