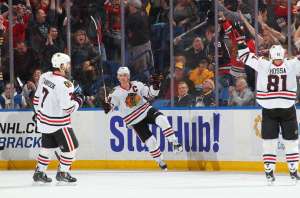 Tonight the Blackhawks host the Blues in what is hands down the single biggest game of the season, so far. The Blackhawks currently sit third in the Central Division with 102 points, while the Blues are in second with 103. The first place Predators, meanwhile, have played one more game (79) than both the Hawks and Blues, but only hold a one point lead over St. Louis in the standings. Needless to say, things have become pretty crammed in this division, which makes tonight’s game between the Hawks and Blues as large as it is. If the Blackhawks win in regulation, they will own sole possession of second place in the Central. If they win in overtime or a shootout, all three teams atop the division will be tied with 104 points through the same amount of games.

I would expect tonight’s matchup at the United Center to be as close to a playoff atmosphere as a game can get without it actually being the playoffs. Both Chicago and St. Louis understand how important and crucial it can be to end up with home ice advantage in the playoffs, especially if the two teams end up playing each other in the first round. At the same time, both teams are also aiming for first in the division. With Nashville not playing their best hockey lately, it has allowed both the Hawks and Blues to realistically set their sights on winning the Central. So there are two pretty big things partially at stake tonight. I say partially because the Hawks and Blues meet again on Thursday, with that game being in St. Louis.

While winning the division seems like it should be the obvious desire for each team in the Central, it may not be. Here’s why:

With the Ducks most likely finishing as the top team in the West, that means the Central Division winner will get the number one wild card team. That team just happens to be the red hot Minnesota Wild, who look like they have that position locked up. The Wild have been arguably the NHL’s best team since they signed Devan Dubnyk a couple of months back, and I can guarantee you that no one wants them as a first round opponent.

Let’s say that hypothetically the Ducks slip up here in the last week of the season and the Central Division winner ends up as the top team in the West. They would then get the number two wild card team. If the season ended today, that team would be the defending champion L.A. Kings who always seem to become a completely different team come playoff time. Again, no one would welcome that first round matchup. The Winnipeg Jets are actually tied with the Kings in points right now (the Kings hold the tie breaker) with the same number of games played, and depending on how the final week of the season plays out, they could end up with the number two wild card spot. While I’m sure everyone would rather take on Winnipeg than L.A., the Jets are no pushover. Just ask the Blackhawks who have only beaten the Jets once this year.

So while winning the division sounds nice, the reality is that whoever wins the Central will most likely have a first round date with Minnesota, or possibly L.A. or Winnipeg.

As for the second and third place finishers in the division, they’ll play each other in the first round. If I am the Blackhawks, I think the best case scenario is taking second in the division with Nashville finishing third. Playing St. Louis in the opening round is not the best idea, especially with Patrick Kane likely out until at least the second round (although Quenneville has NOT ruled him out for round one). Pekka Rinne always has the ability to beat a team on his own, and the Hawks have struggled offensively lately, but I would still take that matchup over one with the Blues.

I hesitate even discussing a topic like this because the second you say you’d prefer to play one team over another, they beat you. That’s just how sports generally seem to work for whatever reason.

This is going to be one hell of a finish to the season over the next week. Tonight’s game between the Blackhawks and Blues means a ton to both teams, as well as the Predators. Obviously it’s still too early to say who will finish where in the standings, but tonight will give us a good idea of who may want “it” more.