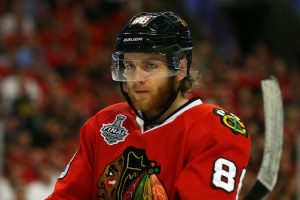 It’s been a relatively slow past couple of months for the Blackhawks, who seem to be waiting as long as possible before making some final contract and roster decisions. In the meantime, they’ve been waiting for any new details in the whole Patrick Kane case. With training camp being right around the corner, here’s what to look for in the coming weeks.

The Patrick Kane stuff is what has been and will continue to dominate the Blackhawks’ headlines, but that doesn’t mean other important stuff won’t be happening.

One question I think we all have is if Kane is suspended for a significant amount of time (and the possible terms of any suspension are completely unknown right now), would that have an effect on the Hawks’ salary cap situation? I’ve heard multiple answers to this question, some of which from professional hockey writers and analysts. No one seems to have a definitive answer, which makes the whole situation that much more difficult.

For now though, keep an eye on Stan Bowman. A trade or two could be on the horizon.