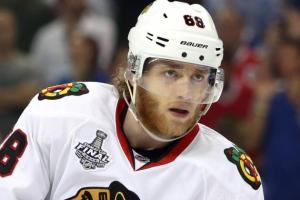 The Blackhawks released their training camp roster this morning, and the most notable name on that list is none other than Patrick Kane. Most people questioned whether or not the Hawks would bring him to South Bend this upcoming weekend due to the ongoing sexual assault investigation surrounding Kane, but here we are 48 hours from the beginning of camp and his name is on the roster.

It is a bit surprising that the Blackhawks would do this and risk his presence turning into a major distraction for the team. A logical idea would have been to have Kane conduct his own workouts away from the team until there is some sort of resolution in his sexual assault case. Doing this would also protect the Blackhawks’ image in the instance that Kane is ruled to be guilty. It wouldn’t be the best look for the Hawks to go on record as having had a player attend training in the midst of an alleged rape investigation, only to have said player found guilty. Hopefully that doesn’t end up being the case here for more reasons than one. Regardless, it will be interesting to what kind of reception Kane receives from the fans when the players take the ice.

We all know who Cumiskey and Rozsival are, although we weren’t sure they’d be invited to training camp, but what about those other names?

Jake Dowell: You may remember him from the 2010-11 season when he was a regular fourth liner for the Blackhawks. He can play center or wing, but doesn’t offer a whole lot other than a physical style of play. He spent the last four seasons splitting time between the NHL and AHL with both the Wild and Stars organizations. At best, the Hawks may keep him and send him down to Rockford.

Jan Hejda: Here’s that veteran, blue line presence the Hawks could really use. Hejda is 37 years old, but there’s still gas left in the tank. He’s a big left handed shot (6’4″) and has always been a pretty reliable defensive defenseman. It wouldn’t be surprising if he makes the team.

Tomas Kopecky: Yet another familiar name. Kopecky was a pretty important role player on the Hawks’ 2010 Stanley Cup-winning team. He generally saw time at wing on either the team’s third or fourth lines, as well as on the PK. He was dealt to Florida prior to the 2011-12 season and has been there since. He won’t score a ton, but can be a good depth player. Due to his familiarity with the Hawks and vice versa, I wouldn’t be shocked at all if he’s on the opening night roster.

Daniel Paille: Paille (31 years old) has spent his career with the Sabres and Bruins, but really made a name for himself in Boston where he was a key role player for both the 2010-11 and 2012-13 teams that made it to the Stanley Cup Final, with the 2010-11 team winning it all. He’s been a bottom six forward most of his career and can be used on the PK. He won’t put up many points, but contributes in other areas. Like Kopecky, it wouldn’t surprise me to see Paille make the team, however, I don’t think both he and Kopecky will be on the Hawks’ final roster.

Lubomir Visnovsky: This guy is the oldest of the bunch and would definitely qualify as a “veteran” presence on the Hawks’ defense, as he comes in at the ripe age of 39. Don’t let that completely fool you though, as Visnovsky has been one of the game’s better offensive defensemen over the last decade and a half, and the belief is that he may have a year or two left in him. Adding him to the blue line could be a gamble given his age, but it may pay off with his experience and offensive talent. At this point, I’d say Hejda has a better shot at making the team, but time will tell.

So, the major points to take away from the Hawks’ training camp roster:

Stay tuned over the course of the next 4-5 days for any updates to the roster or the Patrick Kane situation.