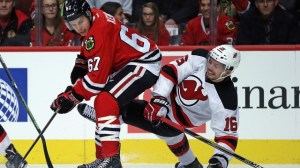 The Blackhawks are showing us that their top two lines have the potential to be absolutely deadly this year, and possibly for years to come. That second line of Panarin, Anisimov, and Kane has been shredding opposing defenses as of late, while the top line of Toews, Hossa, and whoever occupies the “lottery” spot on the left wing always possesses the ability to do the same. It’s the bottom two forward lines that need some help.

Sunday night’s game against the Flames saw Andrew Shaw, Marcus Kruger, and Teuvo Teravainen as the Hawks’ so-called “third line,” while Brandon Mashinter, Tanner Kero, and Ryan Garbutt made up the fourth line. Here’s the problem with that, if you couldn’t already figure it out on your own.

That fourth line is not good. None of those three players own any true play-making skills, with the exception of Kero who has only played in a handful of NHL games. In reality, Shaw and Kruger belong on the fourth line like they were during last year’s Stanley Cup run. Guys like Mashinter don’t really offer much in today’s NHL where skill has become far more important than physicality. And the Blackhawks know this, but can’t do much about it at the moment due to the salary cap.

Ideally, the Hawks would like Teuvo Teravainen to be the team’s third line center. They’ve tried him out there on occasion, but continue moving him back out of that role. Part of the reason for that is the fact that this roster does not have enough skilled forward depth to allow Teravainen to be successful as a bottom six center. As proven during last year’s playoffs and while he was in the top six this year, Teravainen is a guy who, whether at center or wing, needs to be on a line with skilled, play-making linemates in order to be successful. While the line of Shaw, Kruger, and Teuvo has actually been good the last two games, it’s not a permanent thing.

If you look at the three Blackhawks teams that have won the Cup over the past six years, each one has had four lines that present a legitimate threat to score. The only reason the 2014 team didn’t advance to the Cup Final is because they only had three lines that could produce. That is where this current team is headed. Until they can add a skilled guy to their bottom six, this Blackhawks team cannot win another championship. Unfortunately, the only thing preventing that from happening is the salary cap. Once that hypothetically happens, it will allow Quenneville to put his guys at their correct spots in the lineup.

There’s no question that this Hawks team has elite talent as usual. With Keith and Rozsival now back and healthy, their defense is slowly looking less and less concerning, and the goaltending doesn’t figure to be a problem either. It’s the forward depth that is holding the Hawks back from being a true Stanley Cup threat at the moment. Maybe Bowman works his magic this season and pulls off a trade to fix this problem. Maybe he doesn’t. Until he does find an upgrade for the bottom six though, expect this team to remain top-heavy.