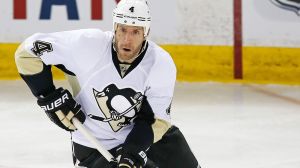 Monday night the Blackhawks traded Trevor Daley to the Pittsburgh Penguins in exchange for fellow defenseman Rob Scuderi. Daley was acquired by the Hawks over the summer in the Patrick Sharp trade that sent him and Stephen Johns to Dallas. The hope was that Daley, an offensive defenseman, would be able to adapt to the Hawks’ defense-first style, but still be effective in the puck moving, fast-paced game that the Blackhawks like to play. Unfortunately for both sides, this was never a good fit.

Keep in mind that prior to joining the Blackhawks, Daley had spent his entire ten year career with the Stars and in a system that never put much emphasis on being a defensive d-man. He was used to being offensive-minded, and asking him to change his ways on a dime after years of playing one specific style proved to be too big of a challenge.

As anyone knows who follows the Blackhawks closely, Joel Quenneville does not tolerate players who are a liability on the defensive end. Hence the reason why he has been relatively reluctant to play rookies big minutes over the years. In the case of Trevor Daley, he was one of the weaker defensemen on the roster and simply was not gelling well with the Blackhawks’ style of play. In other words, a nightmare scenario for Daley, thus the reason for his trade.

What is confusing about all of this, however, is the fact that the Blackhawks knew what they were getting when they traded for Daley. They knew he was an offense-first kind of player who had never played in a system like the one Quenneville runs here in Chicago, yet they still brought him in via the Sharp trade. Maybe the hope was that he could learn the Blackhawks’ style while still incorporating his offensive instincts when appropriate. Whatever the case was, it did not work out as planned.

In return for Daley, Stan Bowman got Rob Scuderi from the Penguins. Scuderi is almost 37 years old and has spent most of his career with the Penguins. He won the 2009 Stanley Cup with Pittsburgh and the 2012 Cup with Los Angeles before returning to the Penguins for the 2013-14 season.

To make this simple, we will just say that Scuderi is not good. He seemed almost like an untradeable player until Monday night because of the fact that no one would seemingly want him. He is slow, he’s not a puck-moving defenseman, and he is one of the worst defensemen in the league in terms of puck possession. He has always been more of a defense-first player, which is good for the Hawks, but that only means something if you can actually execute that style of play in an effective manner.

So why then did the Hawks get him in return for Daley? Well, likely because the Penguins agreed to hang onto one-third of Scuderi’s salary. Because of that, the Blackhawks are opening up about $1 million in cap space, which may not seem like a lot, but actually can be when needing to make a transaction later in the season.

Scuderi still has one year left on his contract, and it would be flat out wrong for the Hawks keep him in their plans for a whole new season after this one. What they choose to do with him both now and next year remains to be seen. In terms of the right here and now, they may plug him into the third d-pairing with Michal Rozsival and let him play there until they feel one of the young guns like Gustafsson, Pokka, or Svedberg can handle a full-time defensive role at the NHL level. If a guy like Gustafsson can develop a bit more in Rockford and proceed to return to the NHL during the second half of the season, in time for the playoffs, that would be the ideal scenario for the Hawks. They could then waive Scuderi and place him in the AHL.

It is also not out of the question that Bowman could take advantage of the extra cap space cleared in this trade and try to acquire another defenseman at the trade deadline.

One thing is for certain here, and that’s that no one should expect much of anything from Rob Scuderi other than a good locker room and veteran presence. The Hawks actually got a bit worse on Monday, and hopefully it won’t last too long.