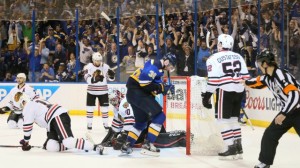 It didn’t end the way the Blackhawks or any of us fans had hoped. Despite an incredible comeback to tie this first round series at three games apiece, the Hawks ran out of gas in Game 7 and lost to the Blues by a final score of 3-2. This year’s better team won, whether we want to accept that or not.

As much as it pains me to admit it, St. Louis turned out to be the deeper and better team in their opening round series against the defending Stanley Cup champions. The Blackhawks had the upper-hand in elite talent, but it was the depth-talent of the Blues that ultimately won them the series, and for just the second time since 2002, St. Louis will play in the second round of the playoffs.

Looking back on this incredible series that really could have gone either way, it was the Blackhawks’ lack of depth on the blue line that one could argue was the major difference between these two evenly matched teams. Joel Quenneville was forced to rely on rookies Trevor van Riemsdyk, Erik Gustafsson, and Viktor Svedberg throughout the series, which at times went just as poorly as you could imagine. And near the end of the series, David Rundblad was thrown into the fire. Here’s a guy that started the year with the Hawks, was allowed to go play in Europe due to his ineffectiveness in North American hockey, and was then brought back to the Blackhawks and relied upon to perform well in the most important games of the season. Needless to say, the Hawks badly needed another top four defenseman in this series, and they didn’t have one.

On top of that, their best players weren’t always their best players. Jonathan Toews was held off the scoresheet in all seven games, his first postseason in which he did not score. Patrick Kane only registered one goal (granted, it was a double overtime winner). Duncan Keith and Brent Seabrook were beaten more often than usual and turned the puck over too many times, and Corey Crawford had a few moments of mediocrity.

All of that, coupled with the team’s lack of defensive depth, was the right recipe for early elimination. Yet they still almost won out of sheer willpower.

No team in the NHL has played more playoff games since the 2009 postseason than the Blackhawks. Couple that with the fact that the Hawks are loaded with Olympians who have played in multiple Olympic games, and it’s fair to argue that these guys may be exhausted. They looked like it at times against the Blues. And in reality, this first round exit may turn out to be a blessing in disguise.

For the first time since 2012, the Blackhawks will have a long summer by their standards. They will finally have time to rest and recover prior to next season. Also, losing this early should only ignite a fire within that locker room. For a team that may be the most competitive in the league, a first round exit like this should only motivate them more to reach their ultimate goal in the coming seasons.

Looking ahead, this should be a very interesting summer for the Hawks. They will once again be tight against the salary cap while trying to find a way to re-sign big pieces. Andrew Shaw, for instance, will be a restricted free agent this summer and will no doubt receive interest from multiple teams around the league. The Hawks will have to either find a way to pay him, or Shaw will be wearing different colors next season. They’ll also have to fill the spots currently occupied by Ladd, Rozsival, Weise, Fleischmann, and Panik. Panik, however, is the best bet of that bunch to return next year.

Then you have the Bryan Bickell situation. Bickell is still owed $4 million for one more year, which is a major killer in terms of the Hawks’ cap space. Stan Bowman worked really hard last summer and this season to trade Bickell and his contract, but there were no takers. Bowman will likely be tasked with the same challenge this summer, and whether or not he can execute it could play a huge role in the make-up of next season’s Blackhawks.

This first round exit hurts, a lot, but it’s not the end of the world. As maddening as it is to watch the Blues eliminate the Hawks, it’s important to look at the big picture.

Three times since 2010 we have watched massive parades fill the streets of Chicago thanks to the Blackhawks. They were one goal away from playing in three straight Stanley Cup Finals when they lost in overtime of Game 7 to the Kings in 2014. Despite some inevitable roster turnover again this summer, we are still living in the Golden Era of Blackhawks hockey. The fact that expectations in Chicago have become “Stanley Cup or bust” is a good thing, and something that not many teams or cities can compare to.

Dwelling on this loss for a few days, weeks, or even the summer is fine. The Hawks, had they won Game 7, may have gone on to do something special again. Who knows… But don’t get too down on this team. What they’ve done in recent years is nothing short of remarkable, and that cannot be overlooked.

Stan Bowman and the front office will again do what they can to make the Hawks as much of a contender as they can in the coming months. And given the core that is in place with this team, virtually anything is always possible.