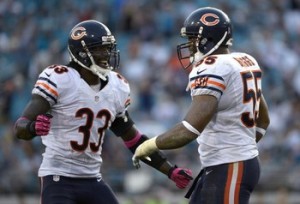 Coming off of two straight dominating performances against the Cowboys and Jaguars, the Bears head into their bye-week this weekend with a record of 4-1 on the year. It took a few games, but the Bears have begun playing like legitimate contenders.

Coming into this season, all the hype surrounding the Bears involved their new “explosive” offense with the additions of Brandon Marshall, Alshon Jeffery, and Michael Bush. While the offense has show some explosiveness through the first 5 games, I believe the real story for the Bears has been the play of their defense.

They were being called “old,” “broken,” “slow,” and so on. If you look at the Bears defensive roster, they are old. Their top four players, Urlacher (34), Peppers (32), Briggs (31), and Tillman (31), are all over the age of 30. Having your top defensive players all that old is not exactly the recipe four success. However, the Bears defense is off to one of its best starts in recent memory. Through the first 5 games, their DEFENSE has scored 5 touchdowns (4 from Tillman and Briggs combined), which is first in the whole league. They also lead the NFL in interceptions, with 13, and takeaways, with 17. Right now, they are playing and executing Lovie Smith’s style of defense perfectly. Odds are that they won’t continue to play at this same pace as the year progresses, but getting off to such a hot start is never a bad thing.

Offensively, the Bears have been pretty streaky. They were miserable against the Packers in Week 2, they somewhat struggled to get going against the Rams Week 3, and they only put up 3 points in the first half this past week against the lowly Jaguars. However, they looked great Week 1 against the Colts, Week 4 against the Cowboys, and during the second half against the Jaguars. Brandon Marshall is playing out of his mind right now, as he is on pace to set the franchise record for most receiving yards in a single season. The rookie, Alshon Jeffery, is showing signs of becoming a promising receiver as he ranks third among all rookies in receiving yards, and is tied for the rookie lead in TD receptions with 2. (Unfortunately, he injured his hand in the game against the Jaguars and could miss a game.) Jay Cutler has had an up and down season, much like the offense as a whole. Matt Forte has looked decent while healthy, and Michael Bush is proving to be the perfect backup to Forte.

The bottom line here is that this may be the best all-around team that the Bears have put together in quite some time. With the Packers and Lions severely struggling right now, the Bears seem to have all the stars aligning. Odds are that Minnesota won’t keep playing the way they have, and if you look at the remainder of the Bears schedule, they really only have 2 tough match-ups remaining; Week 10 at home against the Texans, and Week 11 at the 49ers. Until the Lions and Packers start to look legitimate again, I am not going to count those 3 games as “tough” ones.

Maybe I am just another optimistic Bears fan, but I don’t see the Bears losing more than maybe 2-3 more games the rest of the way. The path to the NFC North Division Championship seems to be as good as it is going to get for the Bears, but the season is still a long way from being over.