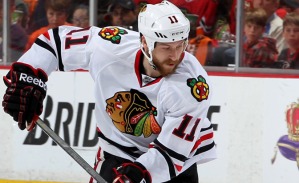 Over the last few days, we’ve seen the Blackhawks trade Brandon Saad, extend Artem Anisimov, re-sign David Rundblad, and sign Viktor Tikhonov. Today, they re-signed winger Andrew Desjardins to a two-year, $1.6 million deal with an AAV of $800,000. Extremely club-friendly contract to say the least, as Desjardins could have received more elsewhere, but chose to take a discount to stay in Chicago.

The focus now shifts to giving Marcus Kruger a new contract and trading either or both Bryan Bickell and Patrick Sharp.

A trade may come before we see Kruger get signed, as the Hawks are already over the salary cap without a new contract for Kruger. Trading Bickell or Sharp will open up between $4-$6 million in cap space allowing room for Kruger’s new deal, and maybe more.

As it stands on the Hawks’ blue line right now, they’ve got Keith, Seabrook, Hjalmarsson, Rundblad, and TVR all set to return next season. They then have Stephen Johns sitting in Rockford poised to make a strong push to crack the NHL roster to begin the season. What the Hawks lack is veteran presence on the bottom four. If they can deal away Bickell or Sharp, or even both, this will allow them to try and re-sign Oduya, which would be a big bonus for Stan Bowman and the Hawks.

If Oduya is not brought back, I would fully expect the Blackhawks to try and sign a cheap veteran defensemen, or two, to help bolster the bottom end of their defensive corps.

My guess is that we’ll start to see these moves get made sometime very soon. If I’m Stan Bowman, I’m trying to trade away a big contract as soon as possible to that I can re-sign Kruger and Oduya without forcing them to wait too long for a new deal. The longer a guy like Oduya sits unsigned, the better chance of another team swooping in and grabbing him.

Keep an eye on the Hawks over the next 48 hours.