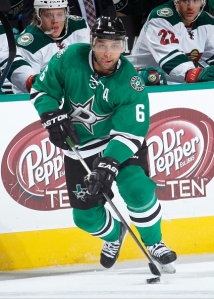 Last week, we learned that Patrick Sharp had been traded away to the Dallas Stars along with top d-prospect Stephen Johns. In return, the Hawks received one of the Stars’ top defensemen in Trevor Daley, as well as winger Ryan Garbutt. Today, Johnny Oduya announced that he would not be returning to Chicago and will sign elsewhere sometime soon. Meanwhile, we are still waiting for more inevitable moves to be made. All things considered, however, it’s a safe bet to assume that most of the transactions that Stan Bowman will make this summer have already been completed.

Let’s first start by talking a bit about the loss of Patrick Sharp. We all knew he wasn’t going to be back next season, but that didn’t ease the pain of losing him. He was one of just a few guys to have played on the Hawks during the so called “dark ages,” as well as on the three Cup-winning teams. He saw it all in Chicago and witnessed one of the biggest turnarounds a sports franchise can have.

Sharp was an obvious fan favorite here for his play on the ice, as well as for his personality off the ice. He is one of the classiest players in the game.

As for what he meant to the Blackhawks, he was a 30-goal scorer just two seasons ago and one of the team’s most clutch playoff performers over the last seven seasons. He could play in all situations and was one of the top leaders in the dressing room, thus leading to his title as Assistant Captain.

Moving Sharp’s $5.9 million dollar cap hit was absolutely necessary for the Blackhawks, but that doesn’t make this any easier. It will be tough watching him play against the Hawks in the coming years, but so it goes. He’ll forever be a fixture in the history of this franchise.

Now, on to the other stuff.

In return for Sharp, the Hawks got Trevor Daley and Ryan Garbutt. Daley figures to be a part of the team’s top four defensemen next season now that we know Oduya is gone. For those unaware, Daley is a step above Oduya in terms of his offense (16 goals last season), but he’s a step or two below Oduya defensively. Whereas Johnny Oduya saw heavy minutes on the Hawks’ penalty kill, Trevor Daley will most likely not. That’s not to say he can’t learn a thing or two from the Hawks’ coaching staff, but it’s a safe guess. He will, however, more than likely see lots of powerplay time.

Ryan Garbutt, when in the lineup, which may or may not be every night, will almost certainly see all of his time spent on the bottom two lines of the Blackhawks. He’s a gritty player somewhat like Desjardins and Shaw, although with less skill than Shaw. It’s possible that he will be battling it out with other players for a consistent role in the lineup.

As of right now, here’s how the Blackhawks lines may look:

A couple of things to mention here. First of all, Kruger has yet to re-sign with the Hawks. The odds of that happening increase by a ton if Bowman can figure out a way to trade Versteeg and/or Bickell to free up more cap space. Trading either one of those guys on their own may be next to impossible to accomplish, so another player off the current roster may have to be included just to move one of those guys. Needless to say, a lot could still possibly change regarding the Hawks’ forwards.

Defensively, I don’t see TVR and Rundblad being the fifth and sixth defensemen to start the season. I’ve got to believe that, again, Bowman is working to move someone and their contract to free up enough space to not only re-sign Kruger, but maybe sign a depth defensemen as well. Some names have floated around as being targets of the Hawks, but I won’t even mention those because a lot would have to happen before Bowman even begins negotiating a contract with one of them.

As for the lines themselves, I would think that Joel Qunneville would like to at least start the season by having Dano and Anisimov together on the same line as they are already familiar with each other from their time in Columbus. Placing them with Patrick Kane seems to make sense at the moment, but that would force Dano into moving over to the left wing where is hasn’t played much. This means we could see him end up skating on the right side of the Hawks’ third line.

If Dano does in fact begin on the third line, we’ll most likely see Artemi Panarin playing left wing alongside Anisimov and Kane. Panarin has an incredible skill set, which should blend nicely with Kane. He also speaks Russian, as does Anisimov. Whether that plays a factor into things, who knows… Of course, this is all assuming Panarin makes the NHL roster.

I’ve also got Teravainen starting as the team’s third line center. It’s no secret that the Hawks would like to see him evolve into an NHL centerman, so my best guess is that they’ll start the season with him there, or possibly even on the second line centering Kane. Marko Dano can also play center, but it’s doubtful that both he and Teravainen will be centers on this team at the same time.

Andrew Shaw seems like the best bet to begin the season at left wing with Toews and Hossa.

There’s still a lot that could potentially happen with the Hawks via trades, which makes predicting their lines a bit challenging. One thing is for sure though, and that’s that we’ll be seeing lots of new faces wearing the indian head next season.