I like the pin stripes on their home jerseys, and the navy blue and red go together very well on both tops.

The colors are what make these jerseys as good as they are. The font that is used on the front of their jerseys is nothing unique, but it looks good.

A lot of teams have tried to pull off the orange and black look in sports (professional and collegiate), but the O’s own that look.

The thing with the Reds is that their logo has never really changed, and I like it a lot. I also like red and black together even though those are two prominent jersey colors throughout sports.

The Tigers’ “D” logo is one of, if not the best, in baseball. It is a true classic logo. Their home jerseys have that old time, classic look to them that I love. The away jerseys aren’t bad either.

The Cubs are one of the oldest teams in baseball to wear pin stripes. It is a very original, neat, classic look. Their alternate blue jerseys are great as well. The logo on the alternates is one of the better secondary logos in baseball.

I really like the font that they used on their jerseys. The colors are very attention-grabbing. The collars on their jerseys are different than just about every other team in baseball in that they have a trim color.

This is my favorite logo in the MLB. It hasn’t changed since they started using it decades and decades ago. Their color scheme is great as well.

This is possibly the most recognizable logo in sports. Their home whites with the navy blue pin stripes are as classic that a jersey can get. Many players consider it the biggest honor in baseball to put on that jersey.

Prior to this past weekend, I hadn’t been to the Cell in almost 10 years or so. During that gap in time, U.S. Cellular Field endured some renovation projects that really did make the park a lot nicer to look at. Before going down to the game this weekend, I didn’t think very highly of the park based on what I had seen when I was there in the past. Now, I have some new and similar opinions compared to the ones that I had before this past weekend.

The outside of the stadium looks pretty cool. I’m not a huge fan of concrete exteriors, but it doesn’t look all that bad on the Cell. Walking up to the stadium from the east you get a cool view of the park from beyond the left field bleachers. You’re also walking over the Dan Ryan expressway at the same time. When you get up to the stadium on the north side of the park, there is a really cool Chicago sports store that sells merchandise for the Sox, Cubs, Bulls, Bears, and Blackhawks. I would recommend checking this place out. On the second floor of the store, you can actually have your game ticket scanned and then walk over a bridge (over 35th street) and into the park. The store and stadium are connected by this walkway/bridge.

My seat was in the upper deck for this game. Apparently at U.S. Cellular Field, if your seat is not in the first level, you are not allowed to walk around the park on the main level. You are restricted to whichever level your seat is on. If you have read any of my past write-ups on MLB stadiums, you know by now that one of my favorite things to do is walk around each park that I go to. Well, since I was restricted this past weekend to only the upper level of the park, I couldn’t walk around the whole stadium. This really hacked me off. No other park in baseball that I have been to (17 of them) has had this “rule.” So since I wasn’t able to walk around the lower level of the park, I got a good look at the upper level concourse.

The concourse on the upper level was actually pretty spacious, considering the stadium was built in 1991. The playing field is not visible while walking around the concourse, but that’s the way that every upper deck in baseball is. Along the field-side of the concourse, the wall was lined with old pictures from the White Sox’ history. This was a nice touch and provided something interesting to look at/read while walking along the concourse. The food seemed to be pretty decent. I had a pulled pork sandwich, which wasn’t great nor bad.

The playing field itself is not the most attractive in baseball, but it’s not terrible either. When the park was first built, the big “wall” behind the outfield stands used to be made up of white pillars. Since the renovations were done on the park, those pillars holding up 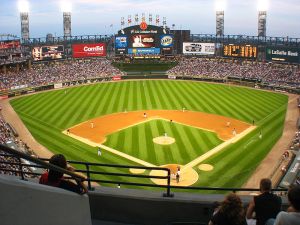 the advertisements have now been painted black, which looks a lot better than the white did. The original seats that were put into the park were blue, but have since been switched to a dark green color. Again, the dark green looks a lot better than the blue. Also, a small deck/patio area was built above and behind the left field bleachers during renovations. They call it the “Fundamentals” area where kids can get some quick baseball tips and lessons I believe. Don’t quote me on that. The scoreboard in dead center field is nothing great. They carried over from the old Comiskey Park the lollipop-looking circles that sit atop the scoreboard. Aside from that, there’s nothing too interesting about it. The screen on the scoreboard that shows replays and videos is pretty small in comparison to other parks. This screen also provides statistics about each player during the game, and give the score of the game obviously. Behind the right field bleachers is another screen that gives more statistics as well as the batting order for each team. Just beyond the center field wall there is a black platform that is covered in green ivy which looks pretty nice. It acts as the batter’s eye.

Going back outside the park, the surrounding area is a lot nicer and safer than what it used to be. There is about a 3-4 block perimeter surrounding the park that has been nicely redone and is now much safer to walk around than it used to be. Just don’t stray too far outside that area…

That’s pretty much all I can write about regarding this park for now. Maybe in the future I’ll get to access the lower level. Even with the renovations, however, I am not ranking this park any higher than I previously had it.