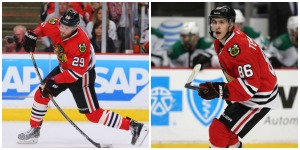 On Wednesday afternoon the Blackhawks traded Bryan Bickell and Teuvo Teravainen to the Carolina Hurricanes in exchange for two draft picks. It was the type of deal that had been whispered about for some time, but no one really wanted to acknowledge or accept the fact that it could actually happen. By that, I mean packaging Teravainen with Bickell.

Following the Blackhawks’ 2013 Stanley Cup victory, Stan Bowman gave Bryan Bickell a four-year contract extension that will be paying Bickell $4.5 million this season, the last of the contract. Unfortunately for Bickell and the Hawks, Bickell has only regressed in terms of his production since signing that contract, making it one of the worst in hockey. For a team with so many stars and young players needing new contracts, the Hawks could not afford to have a guy like Bickell making that much money per season. It put them about as tight against the salary cap as they could get.

Going back to last summer, it had been Stan Bowman’s number one goal to somehow find a place to trade Bickell to rid the team of his contract. The problem was that no team in their right mind was going to take on Bickell and the remainder of his contract without the Blackhawks sweetening the pot in some fashion.

Teravainen, who is just 21 years of age, has an extremely high ceiling for potential and is still on his entry-level contract. He was once the Blackhawks’ top prospect (you can still technically call him a prospect due to his age) and helped the team win the 2015 Stanley Cup.

Despite his elite skill level, Teravainen was never able to take his game up to the next level in his two/two and a half years with the Blackhawks. Joel Quenneville tried him out in just about every spot in the lineup hoping to strike gold, but it never happened. Teuvo had stretches here and there where he looked like he might finally be turning the corner, but ultimately he landed as the team’s number three center this past season; a role that he is not built for.

While the Blackhawks absolutely had to get rid of Bickell’s contract, that doesn’t make losing Teravainen any easier. He is still young enough to where he could easily turn into one of the NHL’s better wingers (Carolina will almost certainly try to play him on the wing).

So with that, here are my takeaways from this trade:

Looking ahead to next season, the Hawks are going to have numerous holes to fill in their lineup. Following the trade on Wednesday, they did re-sign Richard Panik on a one-year deal, but that still leaves them with many open roster spots. Guys like Hartman, McNeill, Vince Hinostroza, Kyle Baun, and others will likely be called upon to fill those gaps. And we haven’t even gotten into the defense of this team, which is a serious problem right now.

Needless to say, the 2016-17 season may be a long one in Chicago. The team simply doesn’t have the salary cap space to add good players via free agency. Instead, they’ll have to rely on their own homegrown products to turn into decent NHL players, which is still a big hit-or-miss situation to be in.

Keep your eyes on the Hawks as we head towards the NHL Draft and free agency. More moves, albeit relatively small ones, are surely on their way. 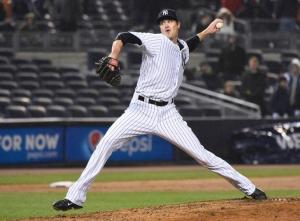 It is becoming increasingly difficult to find any real weaknesses of the Cubs. They sit atop the MLB standings with a 43-19 record, and they lead the league in a number of different offensive and pitching categories. Not a whole lot to complain about at this point. If we were to complain, however, there is one area in which we’d have the right to do so:

Guys like Travis Wood, Pedro Strop, Trevor Cahill, and Hector Rondon have all pitched well out of the pen so far this season, all things considered. You could even argue that Rondon has been one of baseball’s best relievers up to this point. But then you have Justin Grimm, Clayton Richard, and Adam Warren who have looked good at times, but just haven’t shown that consistency that we would like to see. For instance, if the playoffs started tonight, I would have next to zero confidence in Justin Grimm coming in during the 7th inning and escaping a jam.

If the Cubs want to put themselves in the absolute best possible position to win through October, they need to acquire a rather dominant, back-end reliever at or before the trade deadline.

I am by no means the first or only person talking about this “problem.” Anyone who watches the Cubs on a consistent basis sees the same thing. The only question is who might the Cubs’ front office target via a trade?

There are two high profile relievers that have been linked to the Cubs for a few weeks now: Aroldis Chapman and Andrew Miller; both late-inning relievers for the Yankees.

Us Cubs fans know exactly who Chapman is thanks to his time with the Reds. He owns a rocket-launcher for an arm, but can also let go of a nasty slider that catches hitters completely off balance and on their front foot.

This season, Chapman has a 1.93 earned run average to go along with 21 strikeouts in 14 innings, and 11 saves. His downside is the fact that he was suspended for the first month of the season due to a domestic violence incident that he was involved in over the offseason.

On the other hand, you have Andrew Miller. Miller owns a 1.01 ERA with 48 strikeouts in 26.2 innings pitched. And this season isn’t some fluke year for him either. Since 2013, the worst his ERA has been at the end of a season is 2.64.

So if it came down to Chapman or Miller for the Cubs, which should they more aggressively pursue?

The answer is Andrew Miller. Not only has he evolved into one of baseball’s most dominant relief pitchers, but he has always shown a willingness to pitch in whatever inning or situation he is asked to. Certain relievers only like pitching in the ninth, or in close games, or in no-pressure situations. With Miller, you get a guy who will do whatever is asked of him.

Also, Theo Epstein and Jed Hoyer are familiar with Miller from his time in Boston, and vice versa. Believe it or not, that can be a big factor when making trades.

So with Andrew Miller, Joe Maddon could then theoretically use him in the 8th inning as the setup man and keep Rondon in the closer role. Pedro Strop becomes the new 7th inning guy. Just like that, you have three rather dominant relievers at the back of the bullpen to help you finish off games. One of the biggest reasons why the Kansas City Royals won last year’s World Series was due to the fact that they were able to shorten games by having three great, shutdown relievers pitch late in ballgames. When you have a luxury like that in your bullpen, games in which you are winning all of a sudden become 6 or 7 inning games for the opponent.

Of course, to get an Andrew Miller or Aroldis Chapman, the Yankees will demand a substantial return. They will likely ask for Baez, or Schwarber, or Wilson Contreras, or Gleyber Torres. The Cubs will likely not give up any of those players for a possible rental bullpen pitcher. Instead, they may be forced to trade away one of their second-tier prospects, a draft pick, and a player off their Major League roster. Maybe even a little more than that. What I don’t want to see, however, is the Cubs overpay for a relief pitcher that may not re-sign with the team after this season if his contract is up.

The trade deadline is still over a month away, but that doesn’t mean a deal can’t get done before then. The sooner the Cubs can strengthen their bullpen, the better.