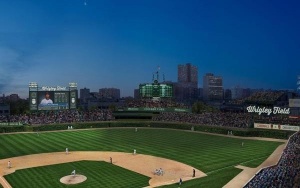 Today, the city of Chicago made the final approval regarding the Wrigley Field renovation plans. It sounds as though the renovations could begin as soon as this October. In total, the cost of this renovation project is estimated to be around $500 million.

With this renovation, a large jumbo-tron will be placed behind the left field bleachers, the Cubs’ clubhouse will be redone, an underground hitting cage will be added near the home dugout, another “party” deck (similar to the one in right field) will be added in the left field corner, the concourses will be redone, and a new restaurant and club level could be added to the stadium. Also, a hotel will be built on the west side of Wrigley off of Clark Street. Some other more minor alterations could/will be made as well.

It is huge that the Cubs were able to get this project officially approved by the city. While I am upset to see some of Wrigley’s old-time traditions disappear, I understand that these changes are necessary in order to put a winning team on the field. This is just one of many steps to what will hopefully result in a World Series championship.

When I think about this renovation plan, I can’t help but think of what the Red Sox did with Fenway Park back in the early 2000’s. Fenway underwent a major renovation to bring in more revenue through advertisements, and the ballpark was updated to make it feel a bit more modern and cleaner. As a result, the Red Sox made more money, were able to sign key free agents, and won 2 World Series titles in a span of 4 years after not having won one since 1918. Clearly, this is what the Cubs are hoping for as a result of Wrigley’s renovations.

While I am sure some people are upset with this plan to renovate Wrigley, this is truly in the best interest of the franchise. If they want to become competitive again and have a chance at winning the World Series, this renovation needs to be completed. Today was just the first step in reaching that ultimate goal.

I have seen enough from Starlin Castro. This guy started his career looking like he would become a perennial all star, but those visions are quickly disappearing. This Cubs team is not winning anything this year, they won’t win anything next year, and who knows what may happen in the years after that. The key to their success in the future is going to be building a very good farm system and developing their top prospects into good MLB players. If you trade Starlin Castro right now, you would help yourself achieve those long term goals.

Castro has shown through his first three and a half MLB seasons that he is capable of being a very good hitter. He had 207 hits in 2011 and batted .307 for the year. Those are very respectable stats. However, he has not gotten any better since then. In fact, he’s only gotten worse.

I challenge anyone to give me an area of Castro’s game in which he is better at today than he was the day he stepped into the Majors. Good luck finding one. He started his career as a weak defensive player, and maybe he has gotten better there over the last 3 years, but hardly. Here’s a good stat for you:

Of all active MLB players, Starlin Castro already ranks 38th in career errors, and he’s only been in the league for less than four total seasons! In his first three and a half seasons in the big leagues, Castro has a whopping 98 errors at shortstop. That is hard to comprehend.

What put me over the top regarding Castro is what took place in yesterday’s (Friday) game at home against the Pirates.

Starlin came up in the bottom of the 8th inning with the Cubs trailing 6-2 and doubled to left-center field. He then proceeded to get picked off of second base by Pirates catcher Russell Martin in the ensuing at-bat, and Castro looked like he had no clue what just happened.

Here’s my point. There have been WAY too many times since Castro came into the big leagues in which he has been caught not paying attention to what is going on in the game. Just complete dumb, mental mistakes.

Last month in a game against the Angels, Mike Trout hit a hard ground ball to Castro at shortstop. Castro took his time fielding it and was in no rush to get the ball to first base. What happened? Trout beat out Castro’s throw for an infield hit. It was as though Castro had absolutely NO CLUE who just hit him the ball (If you are unaware, Mike Trout is arguably the fastest player in the Majors). If a guy like Mike Trout hits a ground ball to you, you better get that ball to first base as quickly as possible. In this case, either Castro was unaware of who was batting, or flat out made a lazy effort. Either way, this was unacceptable.

Recently, Castro has been criticized for not running hard from second base to home plate on a ball hit to left field in which he should have scored on. Instead, he was thrown out at home and the Cubs lost the game 1-0.

Things like that are what have put me over the top with Castro. Winning teams do not have players who are lazy. They don’t have players who are unaware of the situation in the game. Castro has proven time and time again that he is both of those. Even though I strongly believe that Castro has some of the best talent in the Majors, his attitude and continuous mental mistakes are not what this Cubs team needs moving forward.

Theo Epstein and Jed Hoyer should trade Castro now and get as much as they can in return for him. I’d be willing to bet that at least a few teams would give up a few top prospects and draft picks for Starlin Castro.

If you’re wondering what the Cubs would do with that open spot at shortstop, look no further than Javier Baez. Baez is the Cubs’ top prospect right now, and he is a shortstop. I’m not saying that the Cubs would promote Baez to the Majors right away if they do trade Castro, but Baez will be Major League-ready in the next 2 years. Even if the Cubs don’t trade Castro, I believe Baez will push Castro out of the shortstop position whenever he does make his MLB debut.

The bottom line here is that Starlin Castro is not getting any better at baseball since he first came up three and a half years ago. This is by far his worst year at the plate (.236, 4 HR, 26 RBI), and his fielding is not where it should be for a MLB shortstop. His value is still high enough to where the Cubs could get something good in return if they trade him, and that is exactly what they should do.