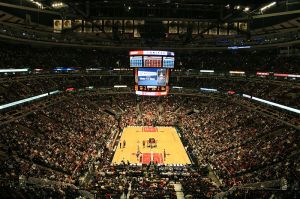 The last time that the NBA All-Star Game was held in Chicago was 1988 at the old stadium. Since then, the Bulls have won 6 titles, the old Chicago Stadium has been torn down, and the United Center has been built.

The United Center, which opened in 1994, has the second largest capacity in the league, only behind Detroit’s Palace of Auburn Hills. It is also regarded as one of the nicest arenas in all of basketball (or hockey for that matter). Yet, it still has not played host to an All-Star Game in basketball or hockey.

The other day, I was browsing the internet when I came across an article written last February that talks about the Bulls hosting an NBA All-Star Game. Certain teams have hosted the game more than once since the last time the Bulls played host. One of those teams, the Houston Rockets, will be hosting it for a third time this year. In the article, Jerry Reinsdorf (the Bulls owner) explains why the Bulls have not hosted the game in so long.

“They’d have to force me to take the All-Star Game.” That is Jerry Reinsdorf’s stance on this topic. He goes on to say, “They take over the building, your season-ticket holders have to be in a lottery to see if they get tickets and then they don’t get a good ticket. Really, no good can come out of it and all it can do is upset your fans.” Really, Jerry? All it can do is upset Bulls fans? Why would Bulls fans become upset if the Bulls were to host the All-Star Game for the first time in 24 years? Do you really think that watching the league’s best players all play in one game on the court of our favorite team would actually upset us? Come on.

I understand that the season ticket holders might not get to keep their specific seats for the All-Star Game, but that should not keep the game from coming to Chicago! The game will sell out regardless of who is sitting in which seats.

I had to go back and reread Reinsdorf’s comments when I first saw them simply because I could not believe what I was reading. How can an owner have that type of attitude and expect the fans to like him? I just don’t get it. It is a disgrace that no All-Star Game has been played at the United Center yet, and now we know why that is in the case of the Bulls.