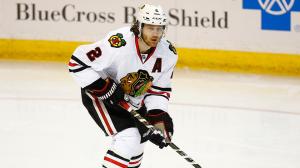 Tuesday night’s Blackhawks – Wild game in St. Paul saw things quickly turn from ugly to really ugly for the Hawks. Not long before the game was set to begin, we learned that Brent Seabrook would be a scratch due to an illness. This was a decent blow to a defensive unit that had already been struggling. Then about halfway through the opening period, Duncan Keith was assessed a five minute major and game misconduct for an “intent to injure” Charlie Coyle of the Wild.

Keith’s ejection left Niklas Hjalmarsson as the only reliable defenseman in the lineup. At the time, the overwhelming thought was that the Hawks were absolutely screwed moving forward in that game given Seabrook and Keith would be out. Turns out, it wasn’t as bad as anticipated. The Blackhawks did lose the game, but it’s not like Minnesota torched the Hawks’ defensive corps the whole night. It could have been a lot worse than it actually was.

All of that is just the short-term effect of Keith’s penalty though. The long-term effect could be a lengthy suspension for the two-time Norris Trophy winner.

I’ll be the first one to try and defend a Hawks player when a questionable situation arises. In this instance, however, I cannot defend Keith’s actions against Coyle. You can’t, under any circumstances, intentionally slash a guy in the face with your stick. It does not matter how heated you might be in “the moment.” Doing what Keith did is just stupid, plain and simple, and he deserves a suspension.

The big question now is how many games Keith will have to miss.

If I had to make my best guess as to what kind of punishment the Department of Player Safety will hand down to Keith, I’d say he will probably be looking at a suspension of anywhere from 3-5 games. The possibility exists that he could get even more.

On the one hand, yes it was a bad move by Keith to do what he did, but there have been a lot worse actions by other players that have only warranted suspensions of 5 games or less. On the other hand, however, Keith was suspended during the 2013 Western Conference Final for a very similar reason when he slashed Jeff Carter in the face at center ice. Seeing as how he has done this more than once now, the NHL may look to send a stern message to the Hawks’ d-man and suspend him for 5 games or more. Any suspension of more than 5 games would mean Keith will miss at least one playoff game, seeing as how there are just 5 games left on the Blackhawks’ schedule.

Obviously, this is not an ideal situation for the Blackhawks. They are already all but eliminated from possibly ending up second in the Central Division, and they also have Nashville sitting just 4 points behind them in the top wild card spot. Losing Keith now is not what this team needs if they’re looking to lock up third place in the Central.

Guys like TVR, Rozsival, and maybe Ehrhoff are going to have to pick up more minutes now, which isn’t exactly a great thing. Luckily for the Blackhawks, 3 of their remaining 5 games are against non-playoff teams.

And as if this Keith stuff is not bad enough news, here’s some more for you.

It was reported on Tuesday by Mark Lazerus of the Chicago Sun-Times that Corey Crawford’s “upper body” injury is in fact a head injury, and it could be that he’s dealing with vertigo symptoms much like Bryan Bickell was last spring and summer. The problem with vertigo is that there really isn’t a timetable for recovery. One person may see their symptoms disappear a lot quicker than others.

In Crawford’s case, no news is bad news, meaning that no updates to his condition likely mean he’s not improving. He has yet to skate since leaving the lineup, and Quenneville is still calling him day-to-day while hoping that he will be ready for Game 1 of the first round.

I, personally, am growing more and more concerned about this. The Blackhawks have, for the most part, been relatively quiet about the Crawford situation. Quenneville has repeatedly given the same quick answer when asked about Crawford’s condition (“he’s day-to-day, hopefully ready for Game 1”), and having listened to Q over the years, his quick answers usually mean he’s a little worried.

I guess time will tell with Crawford.

As for the Blackhawks as a team, their recent play is a bit bothersome, but I still can’t get overly concerned about them. Anyone who has watched the Hawks play over the last 8 years or so knows just how quickly this team can turn things around and go on to win multiple playoff series’ and even the Cup.

With just 5 games left in the regular season and Keith likely to miss at least a couple of those, winning 3 of those 5 would be big for the Hawks. They cannot afford to end up in a wild card spot.