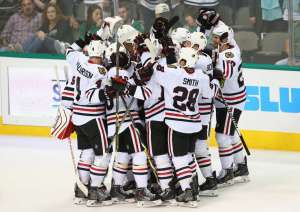 Anyone who watched the Blackhawks take on the Stars the other night in what was each team’s first game of the year knows that the Hawks got manhandled for the first 40 minutes of play. Thankfully, Duncan Keith was able to score right near the end of the first period to put the Hawks on the board first, and Corey Crawford turned in one of those outings that just makes you shake your head in amazement. After a horrible second period in which the Blackhawks went down 2-1, they came out flying in the third and were able to get a powerplay goal from Patrick Sharp that eventually sent the game to overtime. No one scored in OT, a shootout commenced, Patrick Kane did his thing, and the Hawks walked away with 2 points. We’ll take it.

While the Blackhawks did somehow manage to get 2 points out their first game, the fact that they looked so awful through the first 40 minutes cannot be overlooked. Aside from Crawford, Sharp, and probably Hjalmarsson, no one else really showed up to play. As a result, the Stars were practically skating circles around the Hawks for much of the night doing whatever they wanted, except scoring. Besides that, here’s what else I took away from opening night:

All in all, not a good start for the Blackhawks, but great teams find ways to win the tough games. I’d expect their play to pick up over the next week or so once they get their legs back under them and once some chemistry begins to redevelop. They’ll need to pick it up because they are playing in the toughest division in the NHL, and the last thing anyone in the Central wants to do is fall too far behind early in the year. There’s no coming back from that.

Tonight it’s the Sabres who will take the ice against the Hawks in their home opener. I’m anticipating another 2 points tonight in what should be a game in which the Hawks start to figure things out.

Thursday night the Blackhawks will officially open their 2014-15 season in Dallas when they take on the much improved Stars. Already, there are story lines heading this game. Injuries, line juggling, and new faces in the lineup will all have an impact on the Hawks’ season opener.

Let’s start with the injuries. First off, Joel Quenneville said today that it looks like Kris Versteeg will be out around three weeks with a lower body injury. He suffered the injury in practice the other day, but the Blackhawks won’t specify as to how or what happened, per the usual. That stuff is “secretive” in the NHL these days. This is really unfortunate for both Versteeg and the Blackhawks because it appeared during training camp and preseason that Versteeg finally had his legs back under him. Many coaches and players said that he looked like his old self again (the guy from 2010). If that Versteeg is the one that shows up this year, he’ll be a big asset on the team’s third line.

Aside from Kris Versteeg, Michal Rozsival also will be out of the lineup in Dallas it would appear. He suffered an upper body injury during the preseason, but has been skating well in practice and may only miss a couple games. His absence from the lineup is not as crucial as Versteeg’s, but he’s out nonetheless.

In place of Versteeg and Rozsival, expect to see Dan Carcillo and Trevor van Riemsdyk (TVR) in the lineup Thursday. TVR (the younger brother of James of the Toronto Maple Leafs and U.S. Olympic team) unexpectedly made the Blackhawks’ opening night roster and figures to be the Hawks’ sixth/seventh defenseman until Rozsival returns from his injury. He was practicing with Hjalmarsson as his partner this week, while Oduya and Rundbald were the third d-pairing. Once Rozsival comes back, I’d expect van Riemsdyk to be sent back to Rockford. The Hawks likely won’t carry eight healthy defensemen.

If it’s not one of David Rundblad or TVR in the lineup Thursday night, it’ll be Kyle Cumiskey in their place. He is quite similar to Nick Leddy in that he’s a very fast, puck-moving defensemen that likes to be involved in the offense.

As for what lines you should expect to see Thursday, look for them to be Sharp-Toews-Hossa, Saad-Shaw-Kane, Bickell-Richards-Smith, Carcillo-Kruger-Morin. As you can see, it looks like Quenneville has already decided that he doesn’t like the Saad-Richards-Kane trio and will instead start the season off with the second line that owned the Kings in last year’s Western Conference Final. I would anticipate that sometime in the very near future Q will go with Richards centering the second line, but for now we’ll have to wait for that. I don’t understand his reasoning for giving up on Richards with Saad and Kane before the regular season even starts, but it is what it is.

Now, the game itself. Dallas is coming into this season already with a ton of momentum behind them. They ended up shocking a lot of people last season by making the playoffs as a wild card team, and they really did put up a good fight against the Ducks in the first round. This summer, they acquired Jason Spezza and Ales Hemsky to really bolster their offense that already consists of Jamie Benn and Tyler Seguin. They’re going to be a tough team to beat on a nightly basis.

I’m expecting the Stars to give the Hawks all they can handle in the season opener, and there’s a good chance that they win the game in front of what should be a very lively, sold-out crowd in Dallas. Remember, these two teams developed some bad blood for one another over the course of last year, thanks to Antoine Roussel and his aggravating style of play. This will be a great test for the Blackhawks right off the bat.