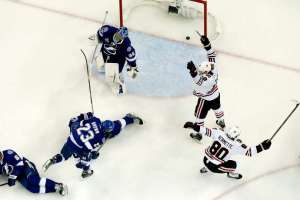 The truth of the matter is that the Blackhawks are coming into tonight’s Game 2 in Tampa Bay knowing very well that they need to step it up from the way they played throughout most of Game 1. The Lightning are coming into tonight’s game feeling pretty good about themselves after their Game 1 performance, or so it seems. Then you have what the national media is saying, and that sounds similar to what the Lightning are saying: “Tampa proved they can hang with and beat the Blackhawks based on how they came out in Game 1.”

We all fully expected, or at least should have expected, the Lightning to come out of the gates just as they did in the first game of this series. They had tons of energy, an overload of adrenaline, were playing at warp speed, and dominated most of the first period. This was to be expected.

The media and maybe even the Lightning players seem to believe that if the Lightning can just do that again for the rest of this series, they’ll win and be fine.

Since no one in the media seems to be saying it, I’ll say it: There is NO WAY that Tampa Bay can play with that much energy for an entire 60 minutes, let alone for the remainder of this series. It’s physically impossible. If you go back and watch the replay of the first period from Game 1, it won’t take more than two minutes to realize that the Lightning were jacked up on adrenaline (first game of the SCF, and on home ice) and using every ounce of energy they had in them. It’s not possible for a team to play that way for an entire game, or four, five or six. Counter my argument as you’d like, but I’m sticking by my words.

The second half of Game 1 was largely controlled by the Blackhawks, who were finally able to net two goals in a 1:58 span late in the third period to tie and win the game. They responded to Tampa’s fast start like the experienced champions that they are and walked away with a big win. All the pressure in the world now rests on the Lightning’s shoulders heading into Game 2.

Tampa Bay knows very well that they most likely cannot recover from a 2-0 series deficit with the series shifting to Chicago for games 3 and 4, thus making Game 2 a rare must-win.

On the Blackhawks’ side of things, they know that they didn’t play anywhere close to their best game in Game 1, yet still found a way to win. That in itself should give them some added confidence heading into tonight’s game.

So, what do we need to see from the Hawks tonight to get a 2-0 series lead?

As I already said, Game 2 is a huge game for the Lightning. They cannot afford to go down two games to nothing with the series shifting north to Chicago where the Blackhawks are nearly unbeatable right now. At the same time, this is also a big game for the Hawks for the exact same reason. They know that if they get a win tonight, Tampa Bay will be backed up against a wall fighting for their life just three games into the series. Heading home up 2-0 in the Stanley Cup Final is a scenario any team would dream of.

Like was the case in Game 1, I’m expecting the Lightning to come out flying again in Game 2. The Hawks just need to hold their ground and weather the early storm. There’s no way the Lightning can play a full 60 minutes the way they played the first period on Wednesday, so getting through the first ten minutes tonight either tied or with the lead could be big for the Hawks.