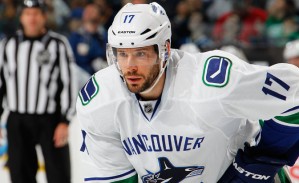 Over the last week or so, a bunch of different names have been mentioned throughout the NHL as possible candidates for being traded. A good handful of those names are big name, superstar players, which makes the trade rumors this summer all that more intriguing. A couple of those names are current Blackhawks. It is not often that Stan Bowman looks to trade away any of his top players, and while this offseason may be no different, one cannot help but speculate as to what could potentially happen in Chicago this summer.

The past few days have been very interesting. For the first time since I can remember, I have heard the names Patrick Sharp and Brent Seabrook mentioned as possible players the Blackhawks may look to deal this offseason. Keep in mind that these are just rumors, meaning that there really isn’t any way to know whether or not the Hawks are actually looking to trade either of those guys. If those rumors are in fact accurate, then some conclusions can be drawn from them.

Patrick Sharp is due to make $5.9 million a year through the 2016-17 season. Brent Seabrook’s contract is for $5.8 million through the 2015-16 season. Trading away one of those players opens up a TON of cap space for the Blackhawks, allowing them to acquire a big name player to fill some gap on the team. The only way either Sharp or Seabrook is traded is if the Blackhawks know they will be getting a star player in return or via a separate trade.

So, who might the Blackhawks look to acquire this summer?

The names Joe Thornton and Ryan Kesler are popping up left and right in regards to the Blackhawks. Both players are supposedly being shopped by their current team, and both the Sharks and Canucks are going to want something of significance in return.

Thornton is due to make $6.75 million per year through the 2016-17 season, and Kesler is set to make $5 million for two more years. If the Hawks were to in fact go after one of these two, we would likely see Patrick Sharp going the other way, or to some other team to free up the cap space.

Will a massive trade like this actually go down for the Blackhawks? Probably not. I don’t see the Hawks parting ways with Sharp, and the only way Seabrook goes is if a big time defensemen is coming to the Hawks. As of right now, I’m unaware of any rumors involving big time d-men other than Seabrook…

A story surfaced shortly after the Olympics that Patrick Kane went to the Hawks’ management and basically said “If you can get Kesler, get him.” Again, who know’s if that actually happened. However, it is no secret that Kane and Kesler have developed some chemistry together via international play, and I would guess that Kane would welcome him with open arms to the second line on the Blackhawks, seeing as how they currently don’t have a true number two center. The bottom line is that I do believe there is some validity to the “Kesler to Chicago” rumors, but I’m not sure that the Blackhawks would be willing to part ways with what it would take to get him. AKA Patrick Sharp.

As for Joe Thornton, I don’t see the Hawks making a move at him. Obviously, he would be a huge boost to the team and would probably elevate Kane’s statistics to ridiculous numbers, but his salary and the amount it would take to get him seem to both be too high for the Hawks. That’s not to say the Blackhawks won’t inquire about him, but I don’t see them making a serious push.

Someone I haven’t mentioned yet, Johnny Oduya, could very well be dealt in the next month, however. He is entering the final season of his contract and is set to make $3.375 million this year. Trading him opens up the cap space to sign a defensemen or two, or to acquire some depth forwards via trades or free agency. I’d say the chances of Oduya being a Hawk next year are 50/50 at this point.

What will most likely happen is this: The Blackhawks will kick the tires on a couple of big names who are being shopped, but will refuse to give up what it will take to acquire such a player. They will fall back on the fact that they have Teuvo Teravainen waiting in the wings down in Rockford, and he will most likely get the best chance of anyone to occupy the Hawks’ second line center position come opening night. Johnny Oduya will be traded for a prospect or two and a draft pick, and the Blackhawks will fill his roster spot with a guy like Adam Clendening, Stephen Johns, or Klas Dahlbeck, all of whom are in Rockford and NHL-ready. The Blackhawks will also sign a depth defensemen or two, as well as a depth forward. The lack of talent on the Hawks’ fourth line was a huge reason as to why they were eliminated by the Kings. Rolling just three lines in the late stages of the NHL playoffs is not a good thing, and I am hopeful the Blackhawks will address that problem this summer.

Really, anything could theoretically happen between now and opening night of next season. Someone like me can only speculate as to what that may be.